Plastic Dreams Exhibition is created by 4:3, Boiler Room’s innovative platform for film and video art, which for the first time brought one of its projects to Italy. Most of the works in the exhibition are real music videos that, thanks to the combination of music and images, are an ideal medium for evoking reflections and intuitions in the public, and that are rarely featured on the circuit of galleries or contemporary art exhibitions, as noted by the curator Amar Elvira.

Where the general tendency in recent years, and in particular for Boiler Room and 4:3, has been one of moving from the physical to the digital, in terms of streaming DJ sets and events. In this show the reverse is true: online videos from both platforms have been especially selected for the site-specific project at B9. This transition adds a physical context to the visual dimension, leading viewers to reconsider the central role that this plays in the perception of art. The result? An immersive and all- encompassing experience.

The exhibition is only open during the evenings, in order to guarantee the most involving and evocative experience created by the lighting and the videos in the spaces of the ex-industrial complex. The route winds its way through two buildings at the Manifattura, starting on the first floor in B9 and finishing in the basement of B8.

The spaces on the first floor are in semi-darkness, lit by coloured lights that redesign the area, framing the videos, just like the 4: 3 reel, inserted into a cubic structure and visible only through a porthole.

The first video we see is Blessed Avenue by Jacob Satterwhite, where virtual perversions and queer images are immersed in a lawless parallel world. In the large adjacent space, separated by dazzling white lights, you find three further projections: Holly Herndon & Jlin (feat Spawn) with the video Grandmother, directed by Daniel Costa Neves, Lafawndah featuring Reba Maybury with Substancia and Breathing Alone by Hanna Perry, which together convey a mixture of ecstasy, fear and restlessness. 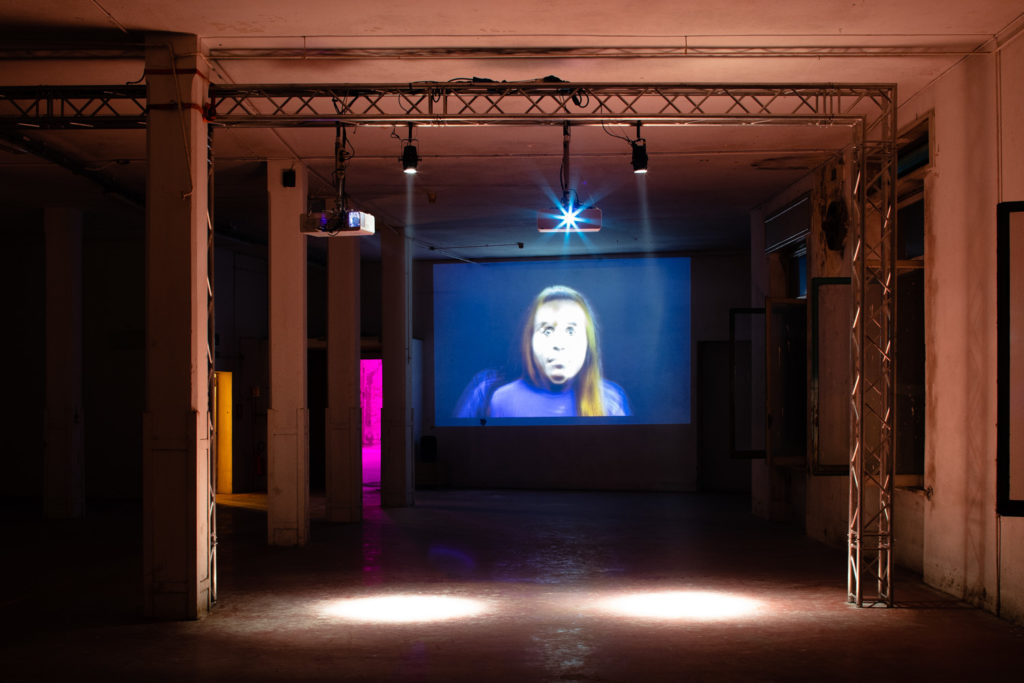 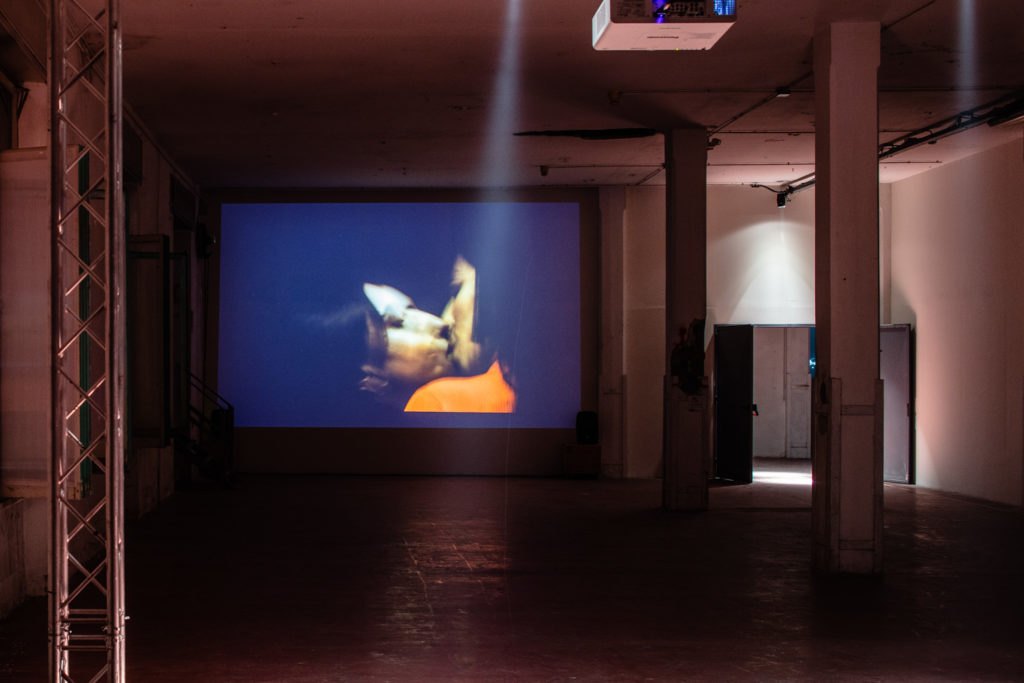 Stepping down into the lower floor, we enter into an almost private dimension where we are
welcomed by the explosive rhythms of T69 Collapse by Aphex Twin directed by Weirdcore, a worthy successor to long-time collaborator Chris Cunningham. The video is an erratic collection of forms and metamorphoses that collapse on themselves in a dystopian and hallucinogenic universe.

Entering into the small adjacent room we find a further example of the work of Weirdcore, his chameleonic style adapting to the music of Jeremy Deller and Cecilia Bengolea in the video for Bom Bom’s Dream. 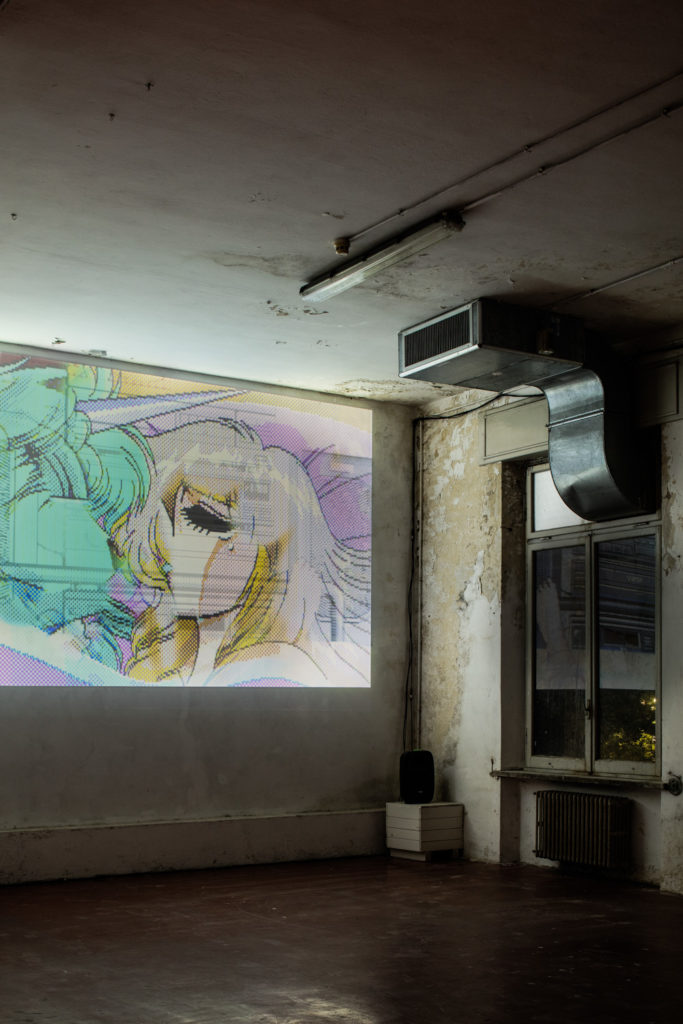 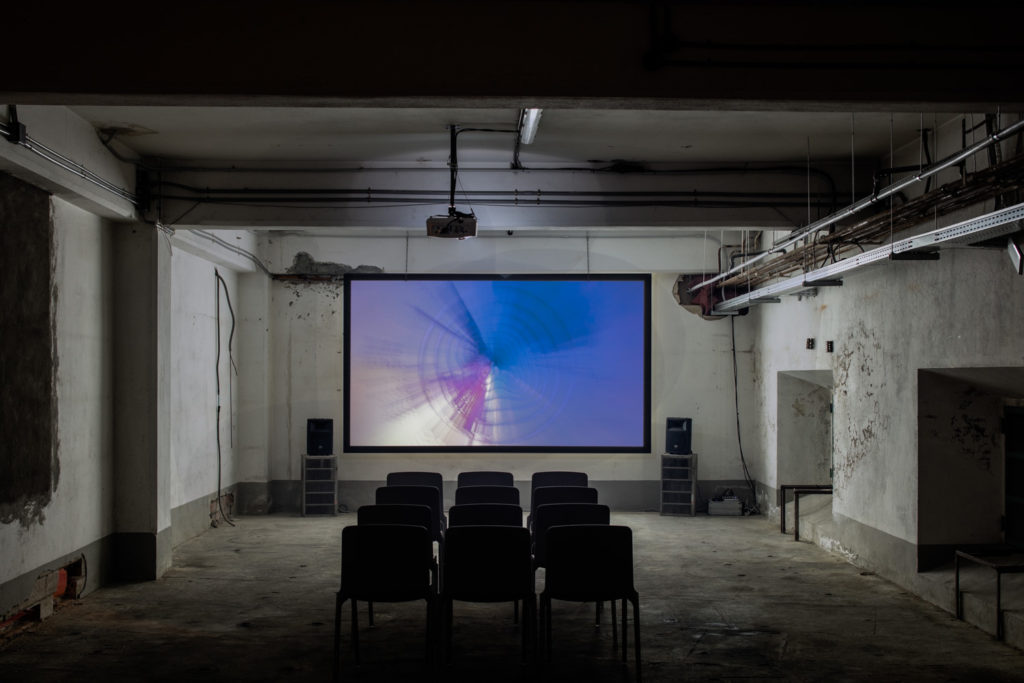 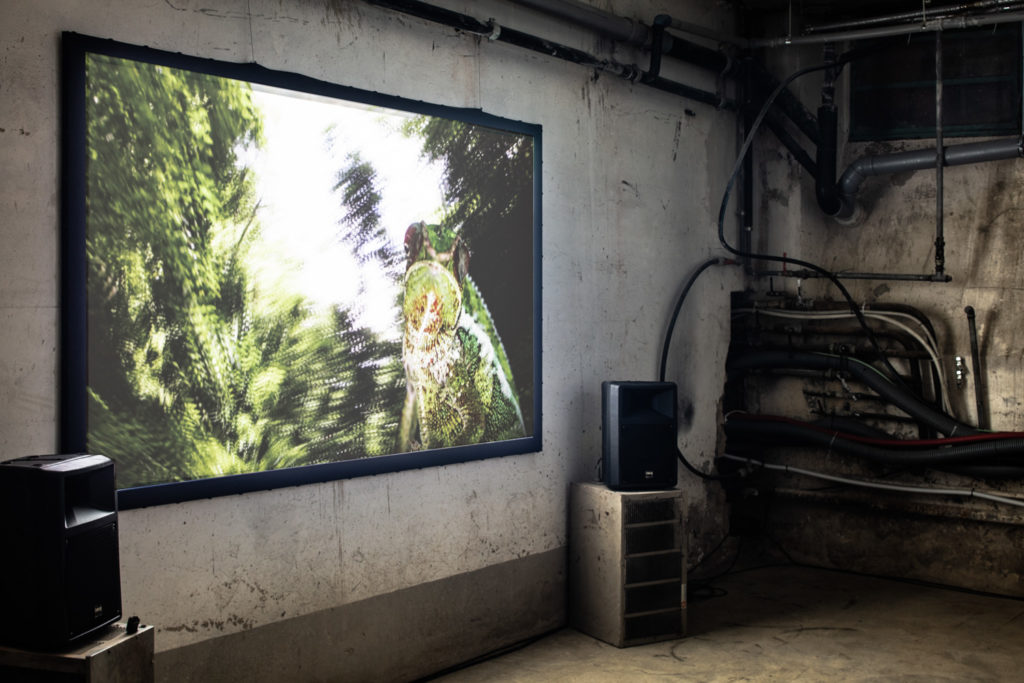 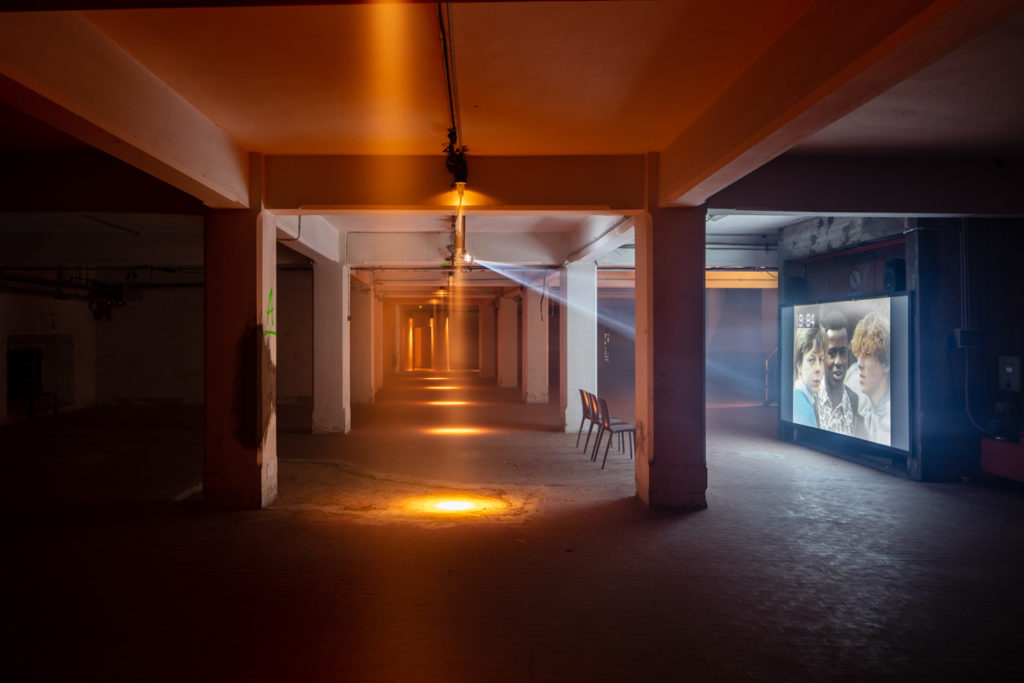 To complete this month of intense collaboration, the Plastic Dreams Closing Party, organised by Boiler Room, takes place on 20 July, an exciting and important step along the road of change and evolution that characterises Manifattura Tabacchi and the project for its regeneration and redevelopment. 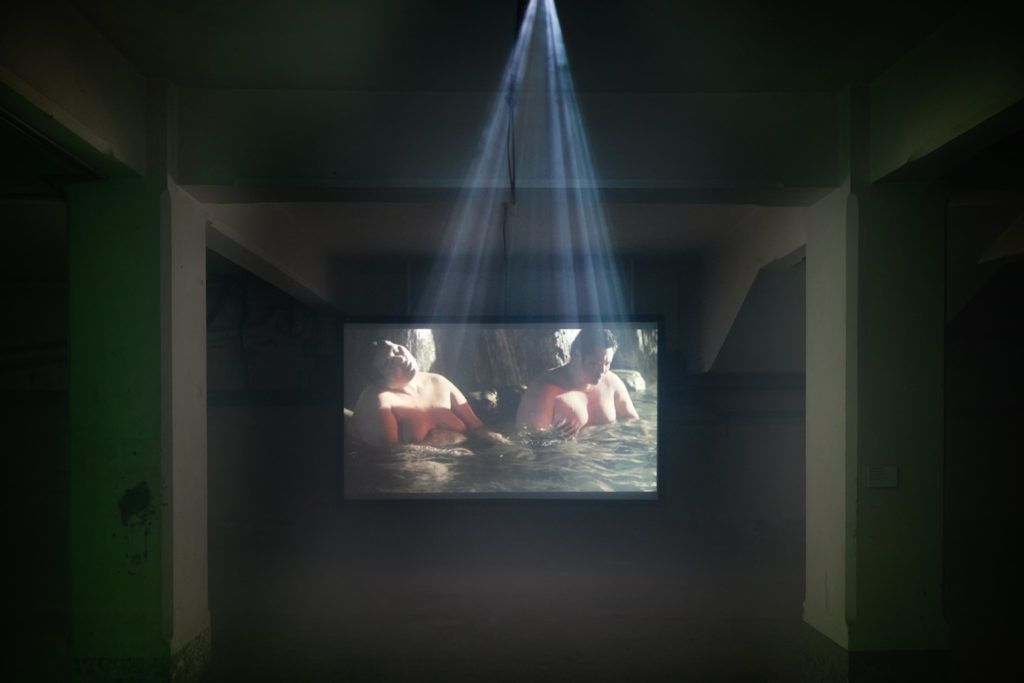 Following the route through the long basement area we arrive at Fiorucci Made Me Hardcore di Mark Leckley, which shows rave culture in all its essence: people dancing non-stop, in ecstasy, without shame, without care, with a style that cannot be replicated.

The sharp cinematography of Light Luxury by Aisha Devi and Tianzhuo Chen, showing us timeless images that tell of men, monsters and divinity, closes the exhibition. This last featured video is mystical, almost mythological, exotic in its sacredness and reverence, like the echo of a god.

Ascending back up to the Cortile della Ciminiera, we are left with the sensation of having completed a long journey through techno utopias, artificial dystopias and evocative realities. As an accompaniment to the themes explored within the exhibition, the events programme at Manifattura features the showcase of a series of films curated by 4:3. The films included are: If I think of Germany at Night which looks at the German electronic scene; Kuso, the debut film by Flying Lotus, and Synthetic Pleasure, a road movie from 1995.

Plastic Dreams represents a natural extension of the innovative work that 4:3 has done over the last year collaborating with venues such as the New York Public Library, Club 2 Club in Turin, Palais De Tokyo and the New York art collective DIS..

Boiler Room is a global platform for music broadcasting which organises and transmits live DJ sets all over the world. Founded in London in 2010, Boiler Room has hosted shows in more the 150 cities, from Stockholm to Shanghai. Originally focused on electronic music such as garage, house, techno and dub, it has significantly widened its musical scope to include other genres, including grime, hip hop, classical and jazz. From 2018 Boiler Room has had 60,000 monthly views, and to date their videos have been viewed 3 billion times, featuring 7,300 hours of content from 6000 artists.

4:3 is an innovative platform from Boiler Room for art films and videos, nicknamed “Netflix for the underground”. Through its content, 4:3 explores themes of performance, identity, culture, and youth subculture. Since its launch in June 2018, 4:3 has collaborated with artists such as Flying Lotus, Holly Blakey, Janelle Monae, Charles Atlas, Jenn Nkiru, Ryuichi Sakamoto, Elijah Wood, Peaches, John Akomfrah and Leilah Weinraub.