Arno – Imaginary Topography is a work of pavement design over a surface area of 350 square metres by artist Andreco, positioned underneath the chimney spire in the central courtyard at Manifattura Tabacchi.

It is the first artwork in collaboration with NAM – Not A Museum.

Inspired by the topography of Florence and its wider provincial area, the work has been delicately placed within the industrial architecture and has a style which is accessible and open to the interpretation of all who experience it. Always taking an interdisciplinary approach that aims to bring an awareness of the natural environment to the public’s attention, as opposed to a more anthropocentric vision, Andreco decided to give this space back to the geology that existed before mankind’s intervention, bringing the focus back to an ecosystem of earth and water. 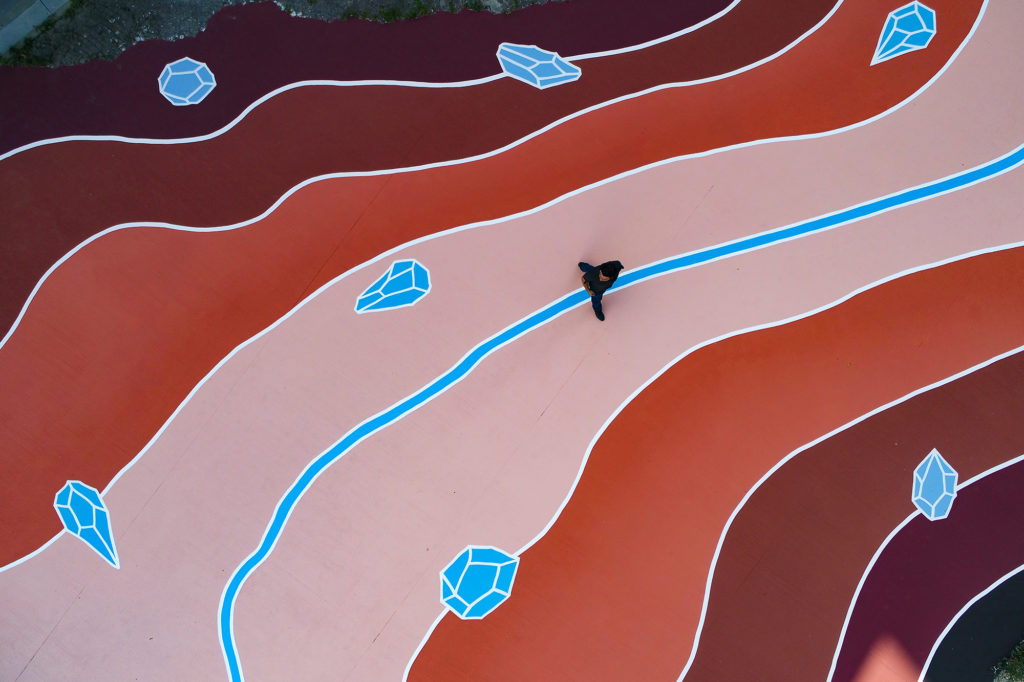 “The shape of the cement in the courtyard to me suggested an imaginary topography, a geological and morphological study of a future landscape. This work of pavement design aims to pay tribute to the territory, to the geology, the rivers, the wetlands, the ecosystems, the different levels in Tuscany and the places you find all these elements. The gradients in red have a blue line running through the centre, symbolically representing the Arno in the province of Florence. An imaginative landscape is determined by balanced blue elements. The shades of red were inspired by the colour of the bricks at Manifattura Tabacchi. The painting deconstructs the architectural elements that are present, it adds a fluidity to the industrial architecture, giving it new life and a new start.

The redeveloped space takes on new functions and meanings, and it is the space that determines the image and the signifier. I have always preferred to work in assonance and empathy with places rather than creating contrasting egotic decoration. The gradients also remind me of colour charts which indicate the aridity of the soil, the lack of water and organic matter in the soil. Scientific studies have shown the changes that rivers have undergone as a result of climate change in Mediterranean countries. The acceleration of processes of desertification, and increasingly frequent and intense extreme meteoric events are changing their fates.

The variation between high and low will be ever more radical. Rivers and boulders are very dear to me, I try to pay homage to them wherever I can, to overturn this famous anthropocentric hierarchy that sees mankind at the top, then the animals, then the plants, and finally mineral and inorganic matter. This vision has led to rapid loss of biodiversity and a radical alteration of ecosystems, and has brought about the current crises in the environment, climate, and in our health. My works aim to rearrange this hierarchy, putting geology, the inanimate rocks, at the top. The plants, the animals, and human beings have to have a mutual and symbiotic coexistence. The ambition of my works is to change this anthropocentric human perspective to one that is ecocentric”

“Underneath the iconic chimney spire at Manifattura Tabacchi, extends an imaginary topography of another place. Wide areas of differing shades of red, interrupted by the presence of blue boulders, form plateaus and channels of earth that embrace and watch over the sinuous line of the river. It is the fruit of analysis of data on the Arno river and the alternation between its highs and lows over the last century, and this work of pavement design symbolically recalls rivers and the changes they have undergone as a result of climate change in Mediterranean countries.

Aimed at overturning this hierarchy that places mankind at the top, followed by the animals, the plants, and mineral and organic material at the bottom, the work plays with animate and inanimate life, questioning epistemological and constructed distinctions, among the warm bricks and the vegetation that was once growing freely in an abandoned square. As always with this artist’s work, the piece began with a study of the area, and aimed to bring out the complexity of its underlying relationships.

What was previously an area of poured concrete, was before that an earthy pit, a sort of metaphor for human intervention on the geography of the planet. Arno inverts this rhetoric, seemingly some sort of Martian landscape, a desert without any traces of human existence, within which water, the origin of all things, timidly flows. In contrast with the vertical, rectangular, and static nature of the architecture, Andreco has created a work with long curvilinear trajectories that are in continual movement, adding new meaning to the space, connecting the industrial past to its present regeneration.

It is as simple as it is revolutionary because, in showing us the earth, the springs and the stones and exposing them to the sky, it re-establishes the natural ecosystem as a living and collective organism, which breaks through the human and the individualistic. The artist’s research projects this truth onto a future landscape which is actually already there. An homage to the geology of the local area, but above all, an invitation to think again about this anthropocentric perspective on the world, putting nature back in its primordial place.”

Andreco works between art, science and social and environmental themes. Andreco is a visual artist and also an environmental engineer PhD specialize in sustainable resources management in different climate conditions, he did a Post. Doc researches on green technologies and Nature Based Solutions for urban sustainability collaborating with the School of Engineering and Architecture of the University of Bologna and the Columbia University of New York City. His artistic research is focused on the relation between humans and nature and between the built environment and the natural landscape.

Since 2000 Andreco is researching between science, environmental sustainability, activism, urbanism, anthropology, ecology, philosophy, and symbolism, on the base of this transdisciplinary researches he creates his conceptual and visual language. Climate Art Project is one of his main projects about climate actions. Andreco uses many techniques to represent his art, from public installations to videos, performance or wall paintings and drawings.

Andreco worked for several international festivals, museums and galleries. Andreco won the special price of the “Talent Prize 2017” at Macro Museom of Contemporary art of Rome, 2016, the international price for rural regeneration Jazzi, Selected Artist for the Gran Tour d’Italie of the Ministry of Culture MIBAC 2019, Selected for the Italian Oscar prize for the environmental communication 2019 related to Climate Change.

The Climate Art Project is an interdisciplinary project combining art, science and environmental awareness from artist Andreco, inspired by scientific and social studies on climate change. The association organises international and local initiatives on art, science and the environment, and collaborates with other associations, institutions, foundations and businesses which operate in the field of sustainability and the ethical use of natural resources.