The Synergetic Result of Colonization: A New Road

Colonization is a complex system that represents the duality of dependence and independence. This photo novella interprets the unique relationship between colonizers and those who are colonized. “A new road” refers to the bridge connecting two cultures and social systems. The bridge in my work is a metaphor for the synergetic moment of connection of two separate complex systems, evolving into one new complex system. It is important to observe the navigation and transition between each. This idea is demonstrated through events that depict synergy taking its course to develop a continuous alteration through the inputs and outputs of the system. The redirection is formed by patterns of interactions that give a predictable pattern of uncertainty. This conveys that redirection is a re-thinking of different perspectives in complex systems – where the changing of a system from within creates the possibility of adaptation and new outputs. The idea that energy self-renders and can remain sustainable – a system that is allowed to move backward in order to progress. The story that indigenous people have gone through from the beginning of colonial times – and still continue to today.

All the photos are heavily exposed to illuminate this new way of thinking. These photos were shot on the famous 7th street bridge in Downtown Los Angeles with the historically political 6th street bridge under construction in the foreground. A duality of the old and new still connected to the same city core/ system.

Influences for this project include painters from some Italian futurist movements such as: Giacomo Balla and the Cyclist by Natalia Goncharova who focused on the abstract aspects of speed, light, sound and movement. As well as Giorgio De Chirico, the father of metaphysical paintings. Bruce Nauman is an American artist as well, although he is embarrassed to be the inspiration for others. Tomás Saraceno and his Webs of At-tent(s)ion which uses spider webs from multiple spiders from different parts of the world to create a “sustainable” structure. I would also like to mention James Luna who is a Native Californian performance artist. And lastly Operating Manual for Spaceship Earth by Buckminster Fuller.

Isaac Michael Ybarra is an avid scholar, artist, and poet, studying Mass Media Communication at California State University of Northridge. Isaac Michael represents his indigenous roots through the cultural ideologies of First Nations in the Americas, he is a descendent of the south west in the United States. Isaac participated in the international performance troupe Virtual Vérité led by Harry Gamboa Jr. Currently he is in Italy studying art history at California State University International Program in Florence. 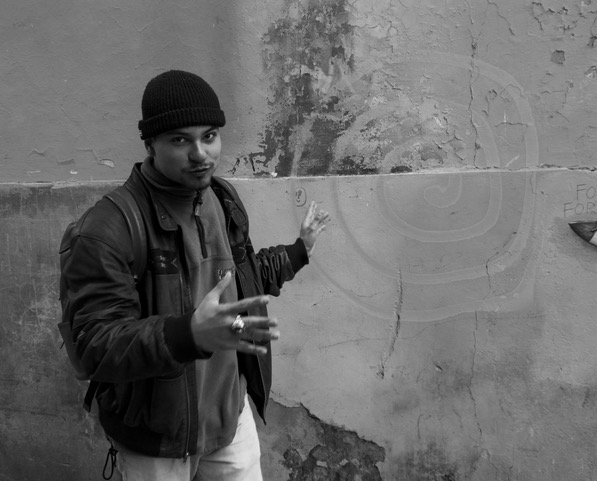