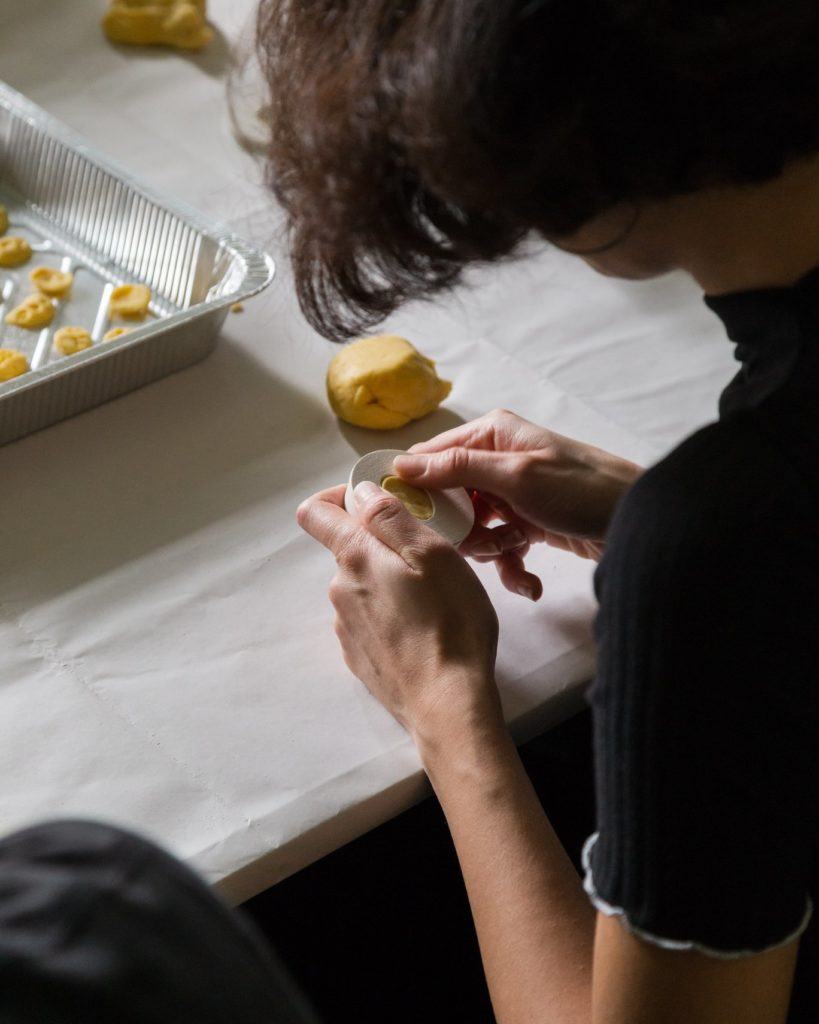 “Edelweiss - Standing on the edge in heels”

For the workshop with the artists in residence, the artistic duo Pantani-Surace designed a project that took its cues from an event directly related to the history of Manifattura Tabacchi.

On 3 March 1944, anti-fascist parties organised a general strike, with the aim of involving large swathes of industry in central and northern Italy. Manifattura Tabacchi was one of the largest industrial sites in the Florentine area at the time, and it stood out thanks to its show of unity and courage. The strike began when two workers, Marina and Valeria cut the main power, a signal to mark the start of the protest. Previously, they themselves had advised the men who worked in the company not to leave themselves open to accusation as they would have been in greater danger in the event of a reaction from the authorities.

“Red like fire on the black that removes identities, violent and irregular like all the beginnings, mouths dry and tight with fear. The grinding of teeth, from the tension and anger, replaced the noise of machinery.“

Edelweiss – Standing on the edge in heels traces its origins in this rebellious spirit and show of collective action, drawing a parallel between Manifattura Tabacchi and the artistic residencies of 2019. At the time of the strike, the majority of the employees were women, as are the resident artists taking part in Wonder. As many things do in Italy, the project consisted of cooking up around 10 kilos of fresh pasta. The pasta took on the form of a partial bite, made by the six resident artists and Pantani-Surace. This bite was first made into dental wax which they then used to make casts of the indentations. Once the plaster had hardened, the artists were able to use this mould to shape the pasta dough, recreating the impression left by their bite.

A part of the pasta was eaten during lunch on the third and final day of working. The remaining part, having been dried and prepared for sale, will be portioned off into 250-gram packets and put on display. Subsequently, the eight casts will be used to make bronze moulds, which will then be used to make a first course of pasta on request at the restaurant at Manifattura Tabacchi, Bulli & Balene, with the possibility of opening up the initiative to other food establishments outside of the site.

The evocation of the bite that gives its form to the pasta dough is linked to the image of grinding the teeth and the choice of fighting for one’s ideals; that emotion between fear and adrenaline that everyone feels at the beginning of something life-changing. During lunch, the bite imprint of each person merged with those of the others, giving rise to a loss of individual identities in the name of a collective identity, something that recalls the situation at Manifattura Tabacchi when it was in operation. Pantani-Surace were particularly interested in the social and familial side of the ex-factory, as well as in the manual skills that characterised production here, and how they could translate these elements into the world of the contemporary artist. Once academic studies are over, “we need to bite a little“, as Giovanni Surace says. The artist must carry with them that moderate amount of aggressiveness, showing themselves willing to relate in all ways, starting from the simplest and most convivial moments and contemplating them within the slow pace of everyday life.

The work carried out by Pantani-Surace and the six resident artists also offers the possibility to the outside world of coming into contact with these bite-marks, creating the conditions for a truly total, relational art that is potentially without end.