Domenico Bianchi retraces his past alongside Sergio Risaliti, his curator for numerous exhibitions. His career has touched on events, characters and movements that now form part of the history of Italian art, with solo and collective exhibitions in some of the most important museums and institutions of the international art scene.

With this work, presented as part of the exhibition SEMPER at Palazzo Medici Riccardi (2009), Domenico Bianchi “turned a picture into something practical”, in the words of Sergio Risaliti. The picture descends from the wall to the floor, providing a place to sit and contemplate. After the Arte Povera and the Transavanguardia, the subject is relocated to a central position. The subject is brought back to intimacy. The referencing of the past emptied the subject of responsibility, while the new generation of artists represented by Domenico Bianchi, brought the subject back to the centre, in an age in which the geographical boundaries of the subject began to disintegrate. Here you can sit and admire a masterpiece: Orpheus by Baccio Bandinelli. 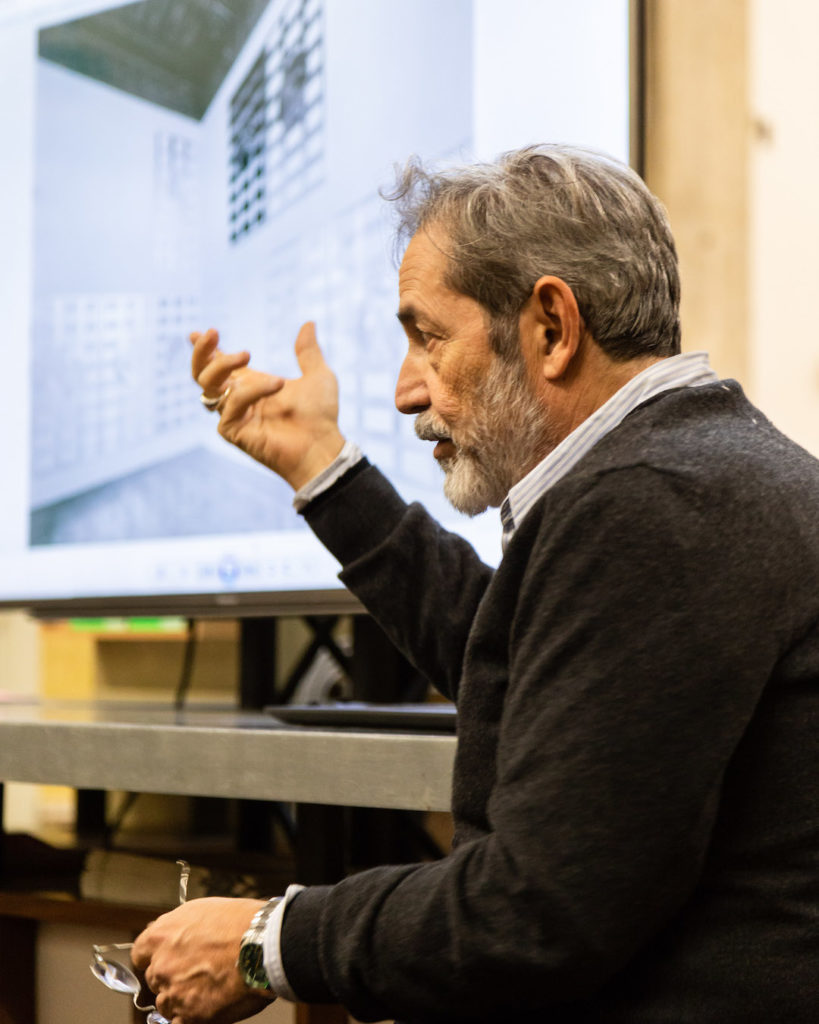 Evident in this piece by Domenico Bianchi is its ability to sit in harmony with its classical and historic surroundings and yet still offer a new perspective. At Palazzo Falconieri, home of the Academia d’Ungheria in Rome, is the only work of Borromini produced for an interior.

For a solo exhibition in 2000, the artist placed a painting over the fireplace. The picture naturally follows on from the work of the Baroque master, behind which lie the esoteric sciences, hidden meanings, and archetypes that can be read through a knowledge of anthroposophy. The same processes can be seen in the collective exhibition Giganti from 2001, at the Fori Imperiali in Rome. On that occasion, Domenico Bianchi laid white ceramic sheets onto Roman ruins, an elegant example of the coexistence between contemporary and historic art.

Many collective exhibitions have seen artworks by Bianchi feature alongside other notable figures in the history of Italian contemporary art. In 1998 his work was exhibited as part of the inauguration of Palazzo delle Papesse, together with Jannis Kounellis, Mimmo Paladino, Eva Marisaldi, and an incredibly young Lara Favaretto. In Viareggio in 2011, Bianchi’s work was placed within an unusual and original setting: the skeletal frame of a boat. Within this 64-metre long yacht that was still under construction, was the exhibition Nostalgia dell’Infinito, a title which referred to the celebrated painting by Giorgio de Chirico from 1912, chosen as a visual horizon for the works of Marco Bagnoli, Domenico Bianchi and Remo Salvadori, all in some way united by a ‘metaphysical’ sensitivity, called on here to question the theme of the incommensurability of the cosmos, of the celestial space and of the underwater universe.

Another notable and recent collective exhibition is YTALIA: Tutto è nulla, from 2017 and curated by Sergio Risaliti at Forte Belvedere in Florence. The exhibition featured a retrospective of the eleven benches that Domenico Bianchi has created, and brought together twelve of the most impressive names in the history of Italian contemporary art. Alongside Domenico Bianchi were Mario Merz, Giovanni Anselmo, Jannis Kounellis, Luciano Fabro, Alighiero Boetti (1940-1994), Giulio Paolini, Gino De Dominicis, Remo Salvadori, Mimmo Paladino, Marco Bagnoli, and Nunzio.

For a double solo show with Mario Merz at Castello Svevo in Bari in 2004, Domenico Bianchi produced an upturned cross, in homage to Mario Merz’s own cross. Bianchi, like so many artists from Arte Povera onwards, has invented his own iconography. In these works, there is a contrast between two types of sign: one vertical, organic and lithe, and one horizontal, which instead refers to the digital grid.

It is therefore difficult to frame the work of Domenico Bianchi within predefined parameters, but re-reading it in retrospect inevitably offers us a glimpse into this life of art, and of the artists who have influenced and built a piece of history whose reverberations still resonate in current times.

PNATura CARDS: what do we know about plants?