Grand Tour by bicycle: the neighbourhood of San Jacopino.

The neighbourhood of San Iacopino: an unforgettable history.

Iacopo Braca and Francesco Gori unveil the true nature of the area.

The Grand Tour by bike tells the now forgotten story of Florence’s neighborhoods in an interactive and fun way. The trip to the district of San Iacopino tells us about community, resistance and everyday life.

The Grand Tour departs from Building 9, now B9, at the Manifattura, which has its own entrance at 33 Via delle Cascine. This is where many of the Manufacture’s finished products were stored, some of which were not sold in Italy, such as phosphorescent cigarettes for Japan, and others which were linked to the state monopoly, like the mountains of lottery cards. Goods left here on the Manifattura’s private train or in the numerous trucks that would distribute the products.

This area also served as a warehouse for goods that were seized by Italian Financial Police and were to be destroyed, although every now and again the employees would somehow all be wearing absurdly coloured socks from the last seized truck. The Manifattura Tabacchi was not just an industry, it was a community, cohesive inside and connected to the outside through its train and its trucks.

We depart to the notes of Piero Pelù’s Viaggio. 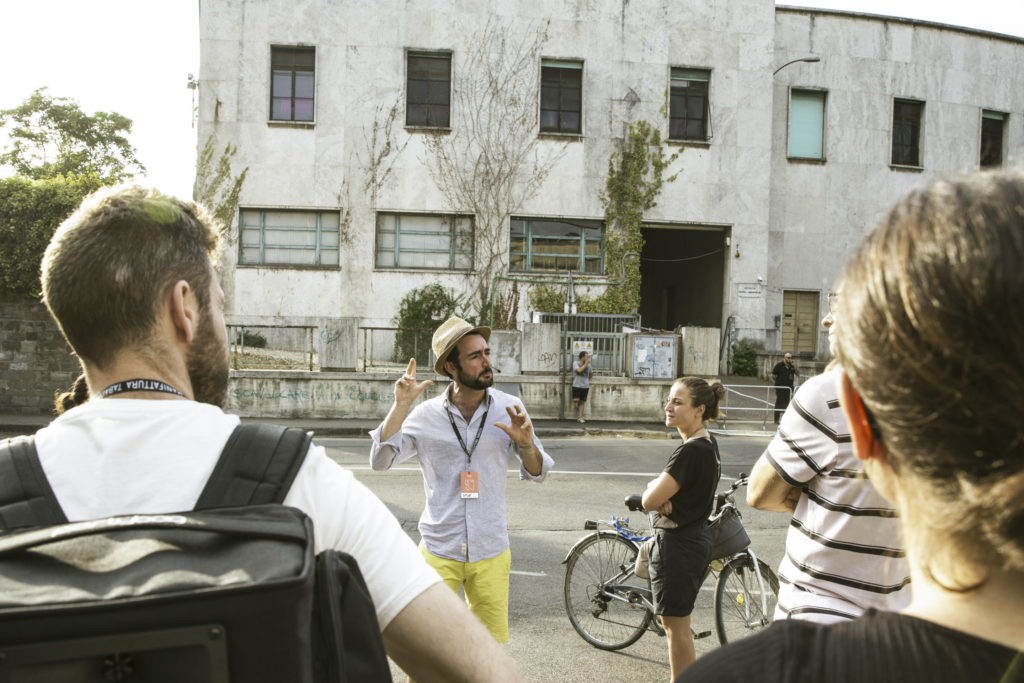 Right in front of B9 is our second stop: the DLF, the Recreational Association for railway workers which was the first and most important of its kind in terms of its size and membership. Thanks to this space, the railway workers, who did tough work far from home, had the opportunity to come together with their families, and try out new and original experiences, including meetings with different people, sporting and cultural activities, and the first forms of organised tourism.

In the difficult post-war period, which saw the reconstruction of the entire national railway network, the desire for participation and novelty gave rise to activities that confirmed the recreational organisation of the railway workers as the most important for their leisure time: a real community, alive and stable.

Pedalling to the music of Simone Cristicchi Sul Treno and Franco Battiato J’entends siffler le train, from the album Fleurs, we arrive at the ‘Casone’, soundtracked by Agapito Malteni Il Ferroviere by Rino Gaetano. 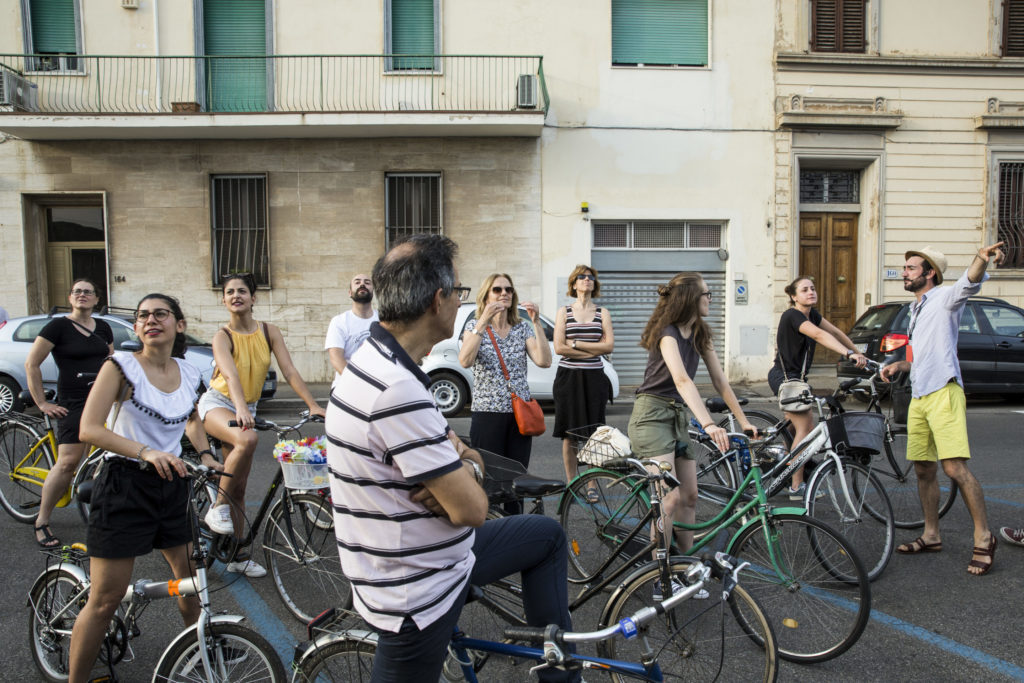 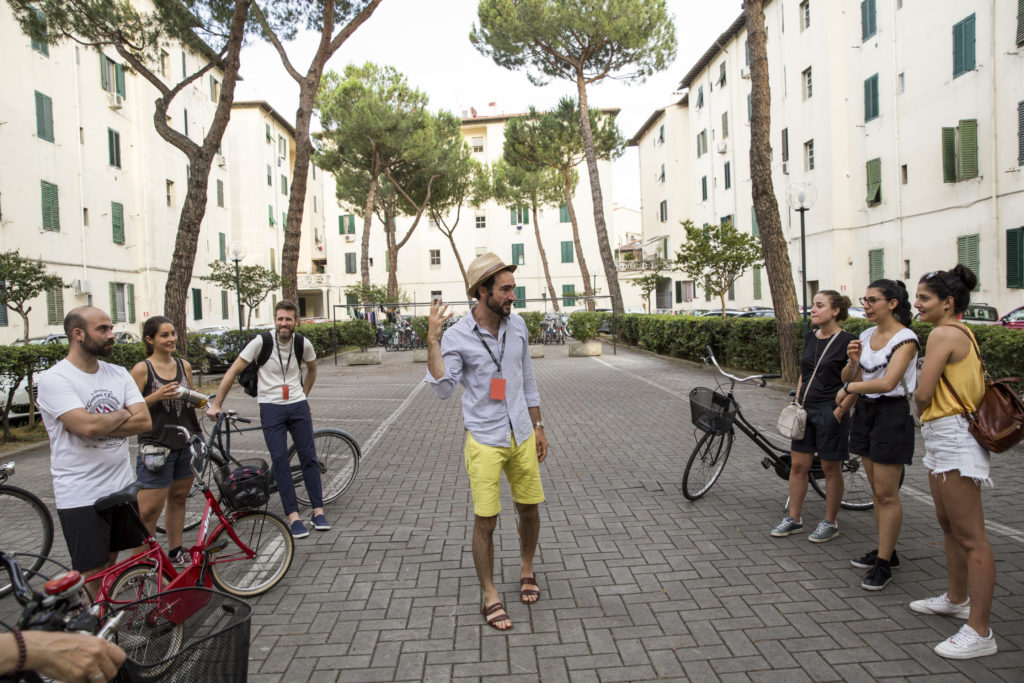 The Casone is a building that occupies an entire block, bounded by Via Petrella, Via Mercadante, Via Rinuccini and Via Ponchielli. Through two gates, you enter into the large courtyard overlooked by ten staircases leading to the two hundred apartments spread over five floors, reserved for railway employees until after the Second World War. A community of over two hundred families that had the large inner courtyard as its only outlet, some would call it simply a large condominium, but at the time it was much more: a village in the city.

Sites on the ground floor hosted the nursery, also equipped with a large hall, and it is in those rooms that the emergency room and the cafeteria were located, where the partisans gathered to consume their meals during the second world war. In fact, an anti-fascist organisation took shape right in the Casone, soon becoming the nucleus of the area’s underground partisan movements. The building contrasted with the German occupied Manifattura Tabacchi and stood out for its excellent food supply, a good health sector and the formation of a commission dedicated to the arrest of fascists.

The Casone fighters found themselves at the centre of several clashes where four members lost their lives, a plaque at the entrance of the building remembers their names: Enrico Rigacci who fell in the park at Villa Demidoff, Alberto Casini, Luigi Svelto and Achille Di Carlo.

The fourth stop is at the old Cinema Azzurri, which takes its name from the aeronautical cadets who would go there on weekends for a bit of entertainment. It is perhaps not very well known that the cinematographic tradition of Florence has always been at the vanguard, even in 1908 it already counted almost twenty cinemas.

With the music of Yellow Submarine by the Beatles and memories of the flood, we arrive at the “Mossa”. 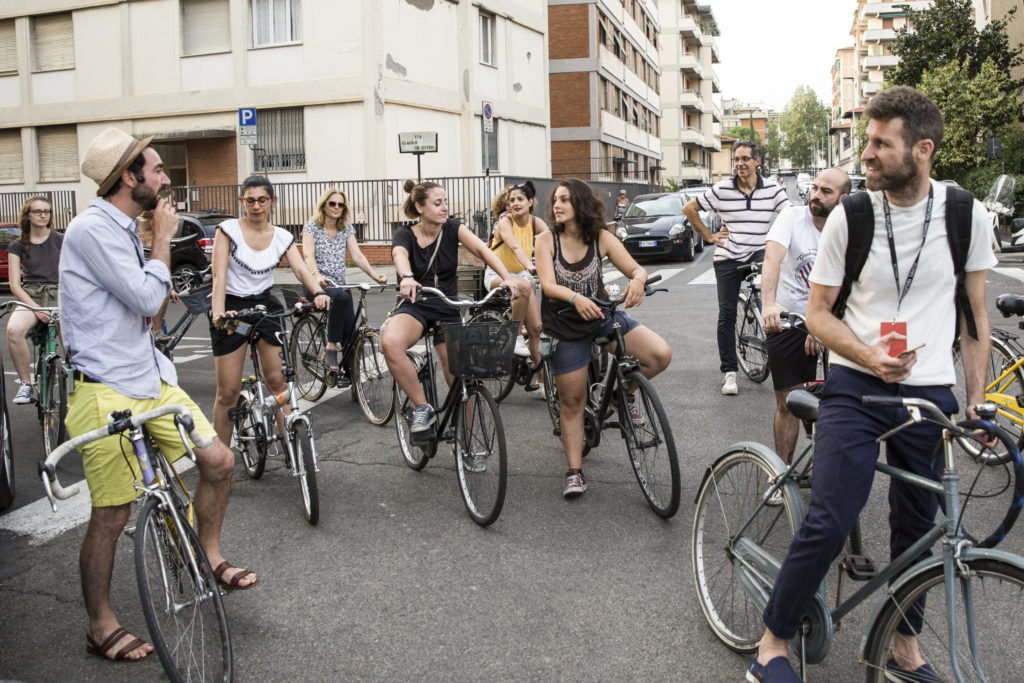 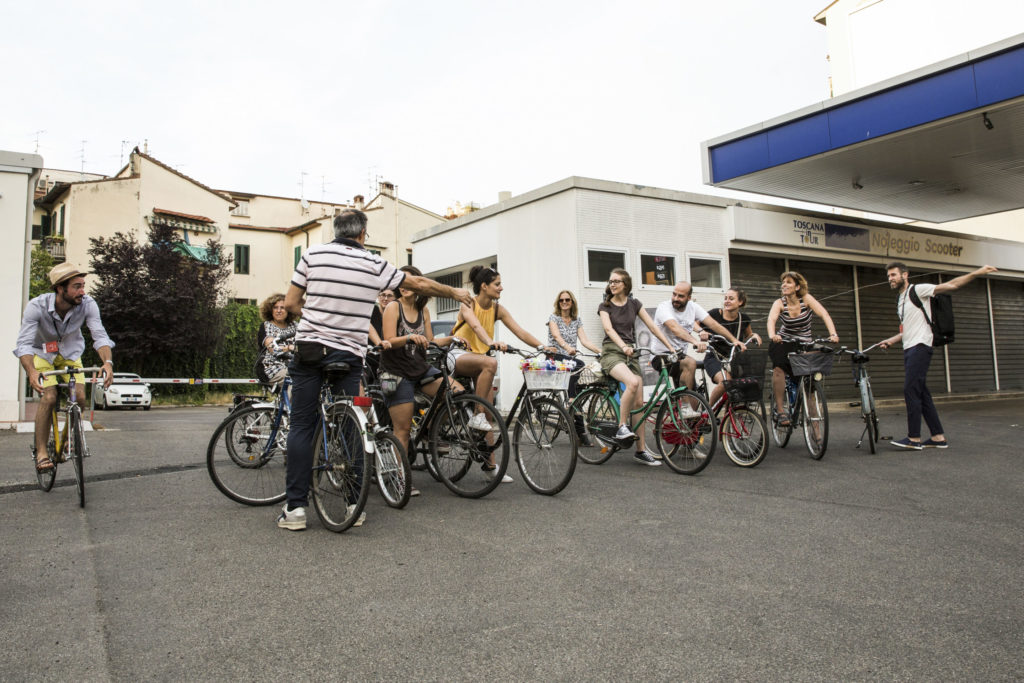 Via del Ponte alle Mosse, which extends from the square at Porta al Prato to Piazza Puccini, owes its name to the “mossa” (starting point) of the Barberi race, which has medieval origins and was traditionally held on 24 June, crossing the whole city, and which was very popular with the Florentine nobility. Using a system of coloured fumes and messengers with mirrors, placed on the roofs and city bell towers, the news of the winner would quickly reach the Grand Duke in the tribune in Via il Prato.

The tour continues to the rhythm of La mossa del Giaguaro by Piotta and Mossa Mossa Eu se tu pego by Michael Tela. The sixth stop is in Via del Vetriciaio, which was a marshy area and owes its name to the Vetrice, a willow tree.

The seventh stop is the Circolo Pescetti in Via Bellini, which brings together many different communities: Chinese, Italian, Singhalese, Peruvian, English. Every year the president of Sri Lanka celebrates the national holiday on 4 February with the community, which is held inside the Circolo. A world that meets at Pescetti, a community that brings together communities. Giuseppe Pescetti was the first Tuscan socialist member of parliament and a staunch supporter of culture as a means of social redemption.

The first football pitch of Fiorentina was actually built in Via Bellini in 1921, and the tour restarts accompanied by the anthem of Fiorentina. The journey continues as we pedal to the sound of Treno by Lucio Dalla.

The roundabout, our turning point

The palace of a thousand faces

The Piazza di San Iacopino is the turning point, the point at which the return journey begins.

The square takes its name from the church of San Jacopo in Polverosa, called San Jacopino to distinguish it from the other churches in the centre. The church is no longer there, it was destroyed by bombing in the second world war, and its name was taken by an already existing church in Via Benedetto Marcello.

In the square we get advice from cycling expert Giuseppe about how to choose a bike: “Do you know where to put it? The tools to carry with you? Gloves, helmet and padlock? How many km do you do? Do you use it every day?”

The statue in Piazza di San Iacopino is Fiorenza, the latest creation from artist Giampaolo Talani, donated to the city by Banca Cambiano. Made out of bronze using the lost wax technique, it stands at 3 metres tall and weighs 500kg.

“Fiorenza takes on a feminine form because for me Florence is like a woman, beautiful, confident, proud and intelligent” says Talani.

The soundtrack for Fiorenza is Beethoven’s Ode to Joy. 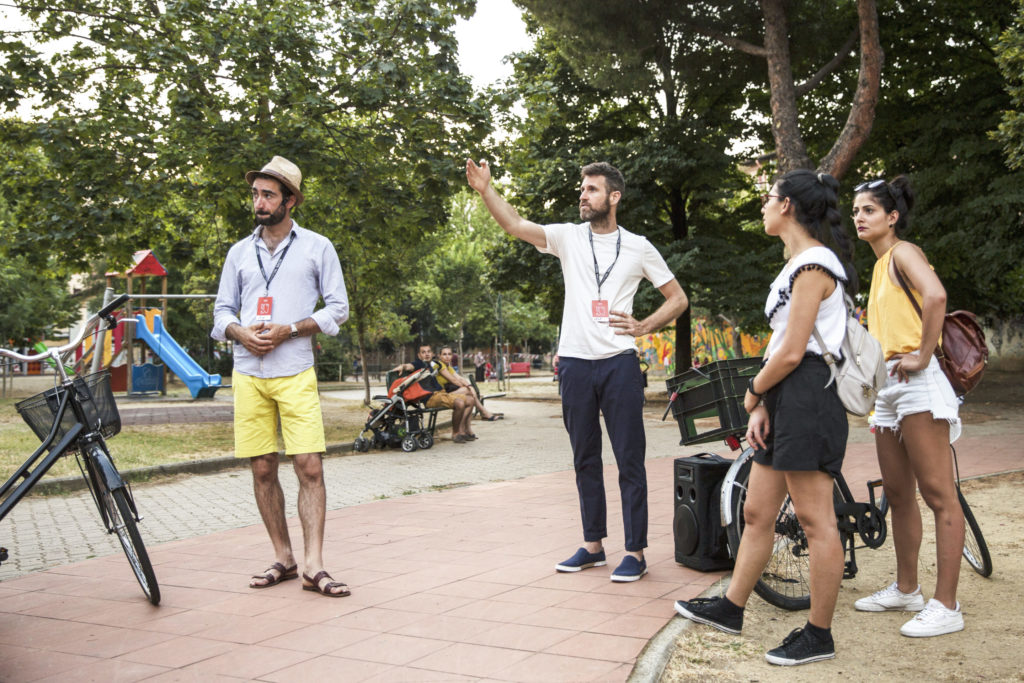 The bike ride arrives at the San Jacopino garden, which since 2012 has been open every day thanks to the activities of families and volunteers. Periodically the association takes care of the maintenance of the park: from the purchase of gardening tools to watering. Since 2012, around 73 plants have been planted. From 2014 the boys and girls of the Verdi middle school have been divided into teams, each side adopting one or more trees, learning to recognise them and researching the myths related to them. The park is an example of a community that is still alive and evolving, something which benefits the neighbourhood and the city.

With I ragazzi della via Gluck by Adriano Celentano, the group takes off again towards the final stop and the conclusion of the tour, coming back to the place where we started: Manifattura Tabacchi.

At this point the tour group itself is like a community, a new network is created where previously none existed. Saving the best for last, we hear the story of Alessandro, the lighthouse keeper, the person who, with his imagination and creativity, has continued to keep the Manufacture alive. Alessandro discovered the beautiful acoustics in B9 and started to play and have fun with the reverberations that the spaces gave to his voice.Today communities are on the web, but they shouldn’t stay solely online, they should live and revive places and their stories.