If I woke up one day / Alessandro Cicoria - Manifattura Tabacchi

IF I WOKE UP ONE DAY

Spatial elaborations from another world.

What would happen if the world woke up one day in a different place than usual?

If I woke up one day is the Living Room column in which six artists will be asked to experiment with new ways of thinking about space, both temporal and physical, in relation to the concept of limits.

Studioli TV was created from the desire to surround Studioli with certain thoughts and images. Its videos are filmed using Sony Hi8 cameras, and the narrative voice is often a telephone conversation with the artists themselves or people who are somehow related to the images we see.

Calling En Plein Air, is the first video in the STUDIOLI TV 2018-20 trilogy. This first episode is a reinterpretation of the En Plein Air exhibition which was inaugurated at STUDIOLI in May 2018. The artists (Kerstin Brätsch, Enzo Cucchi, Stanislao Di Giugno, Marino Melarangelo, Rochelle Feinstein, Gianni Politi, Max Renkel, Patricia Treib, Paulina Semkowicz & Myles Starr) participated in a painting contest en plein air that took place in Studioli’s spaces and throughout the Ponte Milvio neighborhood. The scenes of the En Plein Air video were shot in Studioli’s indoor and outdoor spaces: the rooms/garçonniere, the terrace, the grove, the Tor di Quinto landscape, the views of the Tiber river and nature which surrounds the area. This scenery recalls the paintings of the 17th century Bamboccianti who themselves worked en plein air, painting scenes of streetlife, depicting the Arcadian landscape and daily life in Rome’s poorest neighborhoods.

A few days ago the latest attack on Metaverso occurred. Many might consider my choice to be a strange one, one that is perhaps irresponsible, but now that I am once again surrounded by humans in the flesh, I am seized by the irrepressible desire to look back at my exclusively human memories.

And now that I am here wondering what questions to ask you, I am reminded of Studioli TV. Would you like to tell me about that experiment and about Studioli?

After the collapse of the Noosphere, I, as well as all the others, abandoned my old state of consciousness and became detached from my material life. When I look back on it, it was traumatic, but at the same time it was also liberating.

For many humans Studioli was like a time machine. You could travel back to the most ancient times or fast-forward into the distant future while lying on an area rug of the 1970s…

Artists came from all over the world to bring us their new ideas and we worked hard to translate their thoughts and feelings into a language that everyone could understand.

Studioli was like a set in which we modeled scenes to communicate with other human beings.

Studioli TV on the other hand was the processing of video data that I made with great spontaneity. There was a first series, a trilogy, that collected moving images narrated by phone conversations. In the video Calling En Plein Air, I was already using the first temporal skips. When I watch it now, it seems bizarre, but there was something pioneering about it.
It came from contemplating the images we had initially shot only for documentation.
With those I could remake Studioli’s shows as events that had actually occurred some thirty years prior.
The same protagonists of the shows were invited to recall those events years later. Even the time frame of the phone calls was projected in a distant future, when Planet Earth was no longer inhabited, the same timeframe in which this interview is happening.
Studioli TV was the first attempt to communicate to the human beings of yore just how close we were to this great change.
During those years, we had weird thought processes: memories. Memories were extremely powerful, they were often more profound than the reality of the present. All of the data that presented images of the past, either fixed or moving, were read and interpreted with great feeling, nostalgia, another factor that has been harmful to humanity.

I always thought of you as a Chinese-box. Entering your work was like being inside a game made up of rooms filled with objects that opened up to yet another room, and then another room, and so on. Back then it was ironic, and it is even more so now. Where do you think that propensity came from?

I had just finished my first experiments using accelerated reality, and I wanted to share my discoveries.
I used to be able to drag so many people to places that I found exciting, trying to point out things that often turned out to be invisible to the human eye. At the time it was very difficult to translate a thought into art: you had to stick to the rhetoric of language, that could be recognized, repeated. We were simpler back then. There were artists who, for their entire lives repeated the same models. They used to say that a work of art was good when it could regenerate its value in the moment in which you experienced it.
It’s true that the work of those years should be viewed in the context of and on the basis of the psychic abilities of the time, but looking at it now, I recognize the attitudes which conditioned me back then.

You used to live on a strange block in Rome between Via Flaminia, Tor di Quinto, the Salaria and the Tangenziale Est. An area where the futile aspirations and mechanical behaviors of the bourgeoisie of the time coexisted and a sample of absurd things and Ballardian characters who portrayed a world close to collapse and close to ‘mutation’. Would you mind telling me about your encounter with that place and, if you can, someone or some place or anecdote in particular?

I found myself in Roma Nord almost by chance, a bit like when we made our first landings on the Moon, when one never knew precisely where they would make you land. Then, by and by, my neighborhood revealed itself to be a region full of surprises, immersed in the fertile green of the river Tevere. I was attracted by the rituals and the customs of an authentic neighborhood: it was tribal, its people a clan that seemed isolated from the rest of the world, an indigenous Northern tribe of the Tiberian Amazon.

I have recently gone back there and found nothing: everything was razed to the ground. In Rome, only a shepherd with his sheep was in the Vecchio Tridente between the Pincio and the Campo Marzio. The shepherd lived in an old camper and he was re-writing the history of humanity, adopting the language of Finnegan’s Wake. In truth, I was the one who led him to find that book, when I placed it under a tree along with a pack of red Winston cigarettes that he is so fond of. That was the first book I had read on Earth and the only one I took with me when I left.

In this travelling back in time, several works of yours approach ‘photography’ not so much as a means, but as a mechanism for creation. Notwithstanding the fact that your work always revealed contours that were abstract or nuanced, it always originated from reality as impressed upon surfaces.
What relationship did you have with photography and what use did you make of the ‘reality’ of those times?

I loved painting but didn’t have time to paint, because my creative activity was so frenetic. Now that we are immortal, I’m finally free of that frenzy and I’m working on a large painting cycle purely as a pastime.
The photographic process was a medium which allowed me to quickly store as many elements as possible. It was a way to drag around reality and carry it about. When I was drawing or producing objects or videos, the concept was always the same: I drew from a real experience, synthesizing my intuition. Using that extract, I was able to then work on a new narrative.

In the work Volume, for example, there is a solar engraving that was made using a large photosensitive tape roll. I stamped a series of Studioli’s objects on it; they were reflected images I’d glimpsed out of the corner of my eye. I took the scroll to London and displayed it in certain galleries, it was one of my first transfers of thought. It was also a sculpture that positioned itself in a space, framing that space. At the time, there was still the question of form, which seems anachronistic today, but which we all took very seriously.

You mentioned a project of yours from some time ago entitled ‘En Plein Air’ which was inspired by the Bamboccianti, a movement of painters from the 17th century who realistically depicted life at the margins of society. During a conversation of ours you once defined yourself as a ‘landscape painter’. What did that mean for you?

Living in that neighborhood, in the Arcadian Ponte Milvio, it was impossible to prescind from the misleading beauty of the landscape, from that wonderful natural vision.

There was an artist from a previous generation who was able to outline Nature’s codes to later reproduce them on large walls like artificial landscapes. He, too, was a landscape artist and he worked in the Umbrian countryside.
The landscape is that which you see in front of yourself and which extends infinitely. Then you lower your gaze, and there is a pothole: you put your head inside it and you surround yourself with that black emptiness, discovering that it has a life of its own — its own light, its own nature, and if you look closely there is an environment, a landscape, there, too. It is your job, as a landscape artist, to frame the essential element which is likened to your idea of discovery.

This interview between Alessandro Cicoria and Lorenzo Gigotti took place virtually, under pseudonym, during the Italian lockdown in 2020 caused by the coronavirus SARS-CoV-2 pandemic. 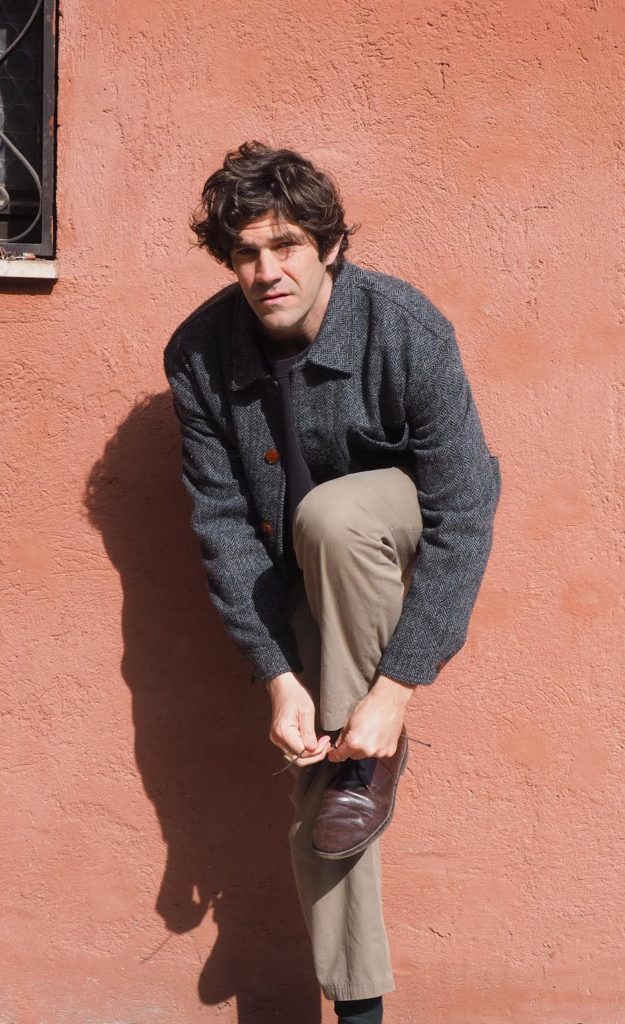 Alessandro Cicoria’s work is the result of the procedure of formalising random occurrences. Most of his works originate from archival study and are presented as the summary of lengthy narrations. His work has been exhibited in galleries and art institutions both in Italy and abroad. Cicoria lives and works in Rome where he founded the STUDIOLI project.

Studioli is an art space started in Rome in 2015 inside an old quad of ivy-cloaked garçonnières by the Tiber River. Artists are invited to work and reinterpret the space, among smoked mirror surfaces, chromatic moquettes, boiseries and Magistretti furniture. 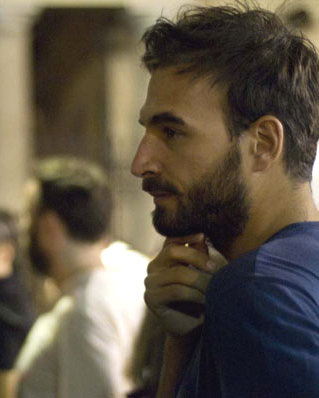 Lorenzo Gigotti is Head of Content and Co-founder of NERO, an international publishing house devoted to art, criticism and contemporary culture.

He is also co-founder and part of the editorial team of Not – Nero On Theory, an Italian book series and an online magazine. On behalf of NERO he also coordinated and curated cultural events and exhibitions for public and private institutions.

LIVE LOUD: the 7 best live albums according to Karim Qqru