A Living Room column / Book recommendations by Florentine publishing house Centro Di which focus on the analysis and the history of ‘libri d’artista’, in which works of art take the form of a book.

In this section, we will interpret space from a geographical and architectural point of view. We thus selected a unique book, an ‘artist guide’, that maps the region of Tuscany in an unusual way. 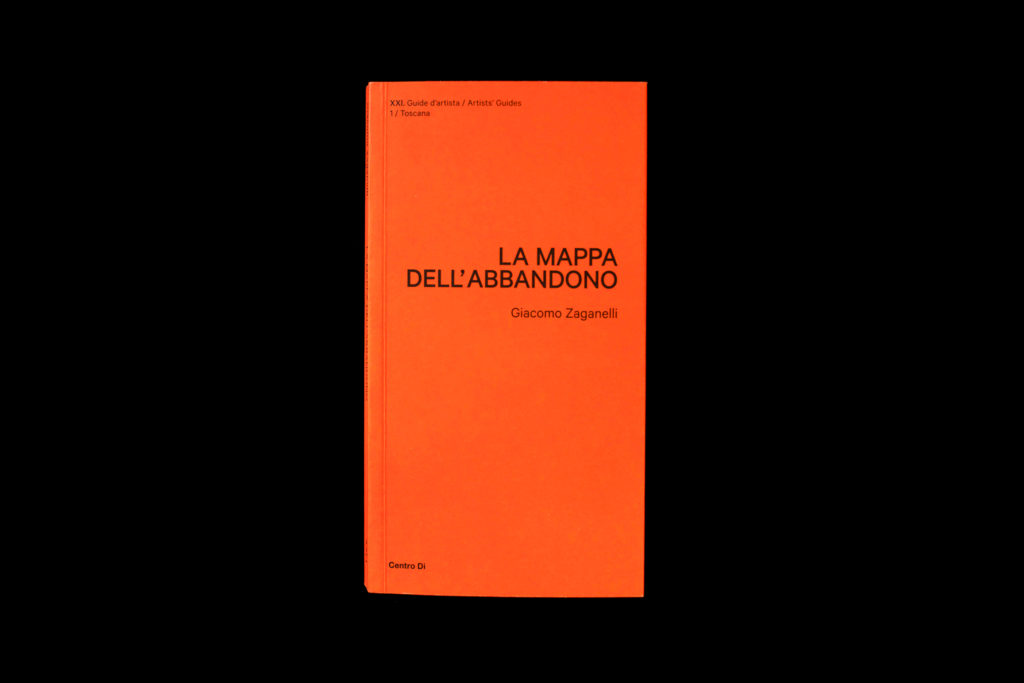 To purchase a copy

In this section, we will interpret space from a geographical and architectural point of view. We thus selected a unique book, an ‘artist guide’, that maps the region of Tuscany in an unusual way. La Mappa dell’Abbandono by the artist Giacomo Zaganelli is the first volume of the XXI. Guide d’artista series. This series is published by Centro Di and edited by Zaganelli and Alberto Salvadori, and published by Centro Di.

The XXI series was conceived in 2018 by Centro Di, Ginevra Marchi, and Giacomo Zaganelli with the intent of offering an alternative to standard tourist itineraries by forging new paths with which to explore and learn about Italy. As residents of Florence, we believe that a more reasonable, sustainable alternative to today’s unbridled and reckless tourism is necessary, one that renders the city livable to its residents. We believe that exposing a different side of Italy can help us reflect upon this issue and offer another way of envisioning and experiencing the ‘space’ that surrounds us.

Significant projects, like that of Manifattura Tabacchi, represent an opportunity for Florence to foster a contemporary art scene that engages both residents and tourists, offering a space conducive to discussion and debate. The XXI series aims to provide a meaningful, albeit small, step in the direction of a new awareness.

The series includes 20 volumes, one for each of Italy’s regions, plus one final volume (hence its title, ‘XXI’). Each of the 20 artists selected to create the guides has been entrusted with the region in which the majority of his or her work is concentrated. Our goal is to compose an identity of Italy as seen through the eyes of these artists. The guides may be used as tools for getting to know the Country from a new point of view. Though each volume has a different author, the volumes are presented with a common aim: an invitation to perceive and rediscover Italy as an infinite source of inspiration.

In addition to Zaganelli’s guide to Tuscany, the project has thus far continued with Bari-born artist Fabrizio Bellomo’s guide to Puglia, Villaggio Cavatrulli.

Each volume has a limited edition, sold together with additional material created by the artist: included with La Mappa dell’Abbandono are 25 Polaroids that were taken by Zaganelli during his ‘roamings’ in certain abandoned areas scattered throughout Tuscany which he writes about in his guide.

The first volume, which we discuss in this article, is dedicated to Tuscany and originated with artist Giacomo Zaganelli’s project, La Mappa dell’Abbandono. Zaganelli used Google Maps to create a vast digital map of ‘forgotten’, abandoned, ex-industrial or ancient archeological sites throughout Tuscany.

This map purposefully provides a keener awareness of our territory’s historical memory, where ‘historic’ also refers to recent and incompleted buildings and introduces the possibility of a present reuse of these very structures for artistic and social purposes.

Zaganelli views space in its social and public dimension. He is compelled to tackle new situations, to try different solutions, to experiment and take risks. In the artist’s words: ‘I am drawn to interpreting the [spatial] contexts for the potential they offer, rather than succumb to the limits they seem to impose. My challenge is to turn negative aspects into potential benefits.’

Zaganelli’s project is the result of time spent in Berlin: in 2009 he moved to the German capital, where its energetic atmosphere exuded tolerance and the promotion of change. The people in Berlin showed a desire to have fun and encounter others that was in part initiated by transforming desolate spaces vacated after WWII bombings into areas re-converted for culture: museums, clubs, and international art centers.

Having returned to Florence, acutely aware of the difference between the two cities, Zaganelli decided to start a project to stimulate dialogue on the fate of locations in his hometown that had fallen into disuse.

At the end of 2010, he published La Mappa dell’Abbandono online, a geo-referenced photographic database documenting over thirty abandoned buildings in the Florentine territory. His aim was to create a greater awareness among its citizens of the patrimony in abandoned assets and the potential for the development of the economy, inherent to cultural, artistic and social projects.

The online map has grown since and has been extended to the whole region of Tuscany. With it, interest surrounding the project has also grown: Zaganelli discussed it at international conferences, MOMA inserted the project in its database on good social practices, and Senato della Repubblica launched a research project under the same name, inviting the artist to Palazzo Madama.

However, Zaganelli’s research is not simply archival: he personally explored the territory by taking every chance available to travel throughout the region. Over the years, he hopped in the car to follow his instinct to pursue solitary, slow-moving roads, his instinct, the shifting landscape and depopulated villages.

Wandering and getting lost, Zaganelli investigates and uncovers the spaces of his native region, at once so familiar and strange. In his eyes, the Tuscan hinterland comes to resemble the Caucasian steppe, a landscape that ‘brings him closer to the archetypal relationship of man and land.’

During his journey, Zaganelli defines the region’s geography: the districts of Pistoia and Lucca — home to the paper production industry, the textile factories in Bisenzio, the coastal area of ​​Massa and the seaside towns, the Dieci Castella in Svizzera Pesciatina, the small towns of Pietrabuona, Medicina, San Quirico and Pontito, Roccastrada and Sassofortino, the La Pietra nature reserve with its purple rock formations.

Traversing the space and losing oneself in it becomes a means of self discovery: traveling to find oneself, to discover oneself through the exploration of contemporary ruins scattered throughout the Tuscan territory.

Ruins, are a metaphor for going from the material to the immaterial, from an inhabited place to a metaphysical state; they represent the past but invite us to contemplate our condition, our roots, and our future.

The artist’s journey is told in this guide, born from the idea of ​​’translating’ a digital project into a book that is an actual guide to forgotten places and a bona fide travel diary as well.

The book is articulated in two ways: it is a guide to about 40 of the most interesting places amongst over 250 tracked on Google Maps which have been grouped into six itineraries and accompanied by historical cards that illustrate their location, events surrounding their design, and building phases up until their fall into disuse.  Simultaneously, this guide unfolds like a travel diary — handwritten notes by the artist overlap and read parallel to the sites’ ‘official’ cards.

The graphics of the volume and the mise en page follow the main idea of providing ​​two reading levels: the artist’s personal ‘notes’ have are printed on transparent leaves, that alternate with a heavier weighted paper upon which the cards and photographic sequences are printed.

The idea behind the paper edition is that the physical volume can complete, reinforce and reinterpret the digital project (expressed in its entirety online) in the most immediate, practical and contemporary internet language, but which needs paper to communicate its poetic and artistic side and to leave a lasting mark, which is akin to stopping time and is fundamental for an artist.

To complete the digital-paper cycle, the book is linked to the ‘Edizioni Centro Di’ app, created using Officine Valis. The app allows the user to download itineraries and, with the help of Google Maps, hop in the car and navigate to the abandoned sites described in the book. In addition there are 7 short videos shot by Zaganelli at seven sites in La Mappa: it is a project that was born digitally, has evolved onto paper, and returns to its digital environment in a continuous correspondence between physical and virtual space.

Centro Di publishing house was founded in Florence by Ferruccio and Alessandra Marchi in 1968. Today, Centro Di is directed by Ginevra Marchi and specialises in the publication of books on art history, architecture, and the decorative arts — including exhibition catalogues, monographs, conference proceedings, museum catalogues, and periodicals.

Until 2004, Centro Di was both a publishing house and bookstore. When the bookstore was closed an archive consisting of 20,000 titles published between the 1960s and 80s (including exhibition catalogs, artist’s books, and publications on  specialized topics) was left behind.

In 2018, with the collaboration of curators Alberto Salvadori and Giacomo Zaganelli, Centro Di created a new series of books dedicated to Italy, XXI. Guide d’artista.

Centro Di also publishes the following periodicals: Perspective (in collaboration with the Universities of Siena and Napoli); OPD Restauro, Opificio delle Pietre Dure’s annual bulletin; Mitteilungen des kunsthistorischen Institutes in Florenz by the German Institute of Art History in Florence; and the Rivista di Storia della Miniatura, the annual publication of the International Society of the the same name.