Following the snaking course of Pantani-Surace’s creative process makes for a fascinating journey. In the talk with Sergio Risaliti, the curator for many of their exhibitions, they return to a sketch. In fact, many of their works begin from a stimulus that defuses a large number of images and associations, each time drawing on the ingenuity that artists employ in reaching a fixed goal. “We like putting ourselves in a situation we can’t get out of”.

Lia Pantani and Giovanni Surace have been an artistic duo since 1995, working across different styles and media and shaping them according to their vision of the environment in which they are working. Often their works are characterised by the length of time they put into researching and creating them, in contrast to the brief time those works are exhibited for. The installation Voglio sentire il rumore di tutte le cose (I want to hear the noise of everything) is a clear example of this aspect. It takes the form of a classical chandelier decorated with ice droplets shaped to look like glass, combining two opposing elements: water and electricity. The chandelier slowly melts, and the movement and the noise of every drop reverberates in different places, on ferns, on clay, on a bed cover, according to the version they exhibited (2003, Ex Meccanotessile, Florence; 2007, Nosadelladue, Bologna, Botanical Garden, Parma, Castello Svevo, Trani, Galleria Madder, London). This slow and vertical precipitation signals the passage of time, whilst the horizontal form of the puddle creates a reflection on memory, all moving to the rhythms of organic life. 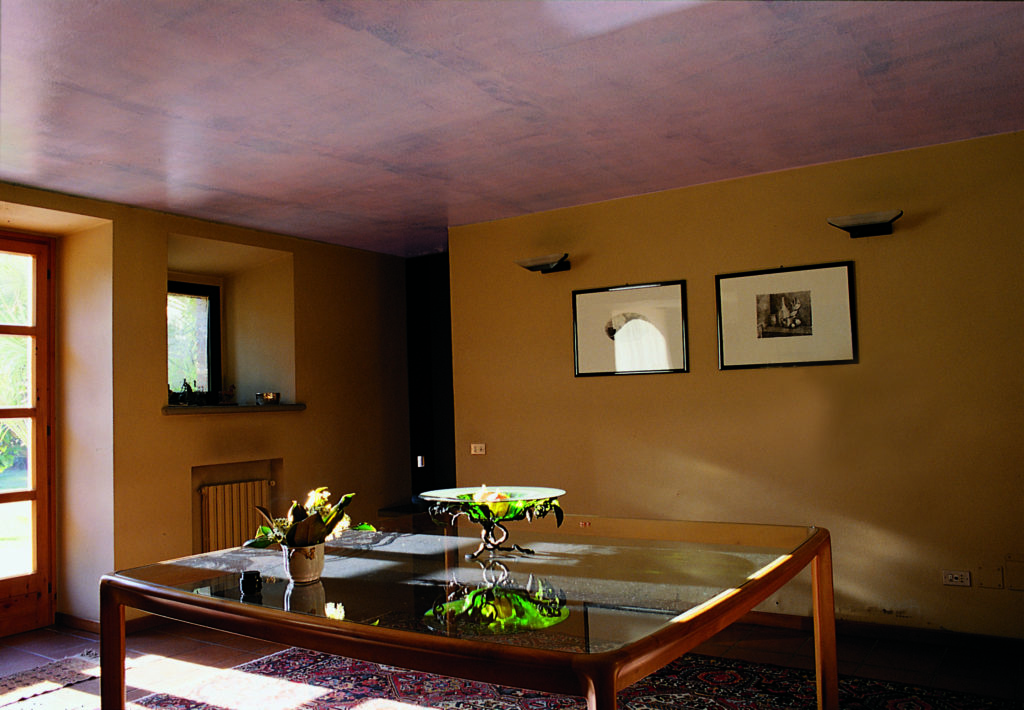 If the movement here is from top to bottom, Tieni fermi gli occhi (1999) (Keep your eyes closed) inverts this gaze and sends it skywards. “We were invited, along with other artists, to create a work that was to be placed outside as part of an exhibition called In Giardino (In the garden). Obviously, we obeyed”. They did so by working inside, in the living room, but in a way that looked at the relationship between inside and outside. Pantani-Surace painted the ceiling with cobalt chloride, a material that changes colour between azure blue and pink depending on the humidity, at the same time recalling the spirit of both Pontormo and DIY.

Humidity once again takes centre stage in the form of water in Ti amo (2005) (I love you), where a plasterboard wall used a system of pipes that revealed the writing by wetting the surface. This draws the viewer into a physical relationship with the artwork and to take care of it by giving it something to drink. This gesture from outside allows the piece to live, but also causes it to become mouldy and ultimately deteriorate. The formal simplicity of Pantani-Surace’s work finds its counterpart in the extension of the issues underlying them: questions of authorship, impermanence, intention, and chance. From here you can see these influences in the fingerprints tracing their way across the glass of Who’s next, dovrebbe piovere su di voi non su di me (2012) (it should be raining on you, not me), or even in the bubbles created through badly gluing film to a mirror (1996/2008): both works move within a dimension of controlled error.

Another consideration is the many roles that the viewers play in Pantani-Surace’s artworks, a reflection of their multifaceted artistic practice, which always takes into account the nature of the materials and their perception. The viewer goes through transformations (The helium house, 1998), they take in the finest aromas (23 giugno, 176, 2001), and they even destroy the work itself. In Non spiegatemi perché la pioggia si trasforma in grandine, 2002/2004 (Don’t explain why the rain turns into hail), the viewer walks over fine and ceramic sheets, coloured to look like confetti, fragmenting and pulverising them.

Pantani-Surace concluded their talk looking at a piece they created for their first exhibition in 1995: I soffiatori di vigole (Those who blow commas), in which balloons were painted with patterns used for military uniforms. “A group of Americans got very angry, for them the balloon had nothing to do with war”. The work was revived this year for the BoCs Art residency in Cosenza, curated by Giacinto Di Pietrantonio.

La Cura at God is green