The final exhibition of the artist residences of Manifattura Tabacchi.

//produced by NAM – Not A Museum

//with the patronage of University of Florence

Free entry, via delle Cascine 35.
Reservation is not required.

GUIDED TOUR
Friday 17th and Saturday 18th of September, from 5:00 to to 6:00 pm, and from 7:30 to 8:30 pm, the curator Caterina Taurelli Salimbeni and the artists will give a guided tour to the SUPERBLAST exhibition.
You can book your ticket here.

To access the some places of the exhibition it is necessary to show the green pass or a negative Covid test dating back 48 hours.

From the 16th to 18th of September, SUPERBLAST opens to the public. The exhibition shows the work of the six artists that won the international call – Edoardo Aruta, Antonio Obregon Bermúdez, Federica Di Pietrantonio, IPER-collettivo, Oliviero Fiorenzi, Violette Maillard – during their residency they embraced experimentation while being immersed in the creative community and interdisciplinary vision of Manifattura Tabacchi.

SUPERBLAST revisits the relationships between man and environment, individual and community, nature and culture. The artists’ research revolves around various themes: the contemporary state of nature in the virtual world; the relationship between urban and natural environment; the paradox of electric mobility; the seeds of colonialism in the representation of the landscape; art in space and in relation to the uncontrollable public context; the parallel between cultural biodiversity and natural biodiversity in the universe of subcultures.

The journey ends with an editorial project that collects the interventions of artists, intellectuals, writers and critics. The book SUPERBLAST is edited by Nero Editions with essays by the authors Domenico Quaranta, Bianca Felicori, Tommaso Guariento, Xenia Chiaramonte, Antonio Perazzi and Riccardo Papacci, who accompanied and enriched the path of the six artists during their residency at Manifattura Tabacchi. The publication will be distributed starting next autumn 2021.

The project takes a multidimensional form and the exhibition represents its experiential level. The exhibition is complemented by a digital archive of the artists’ research: www.superblast.it. 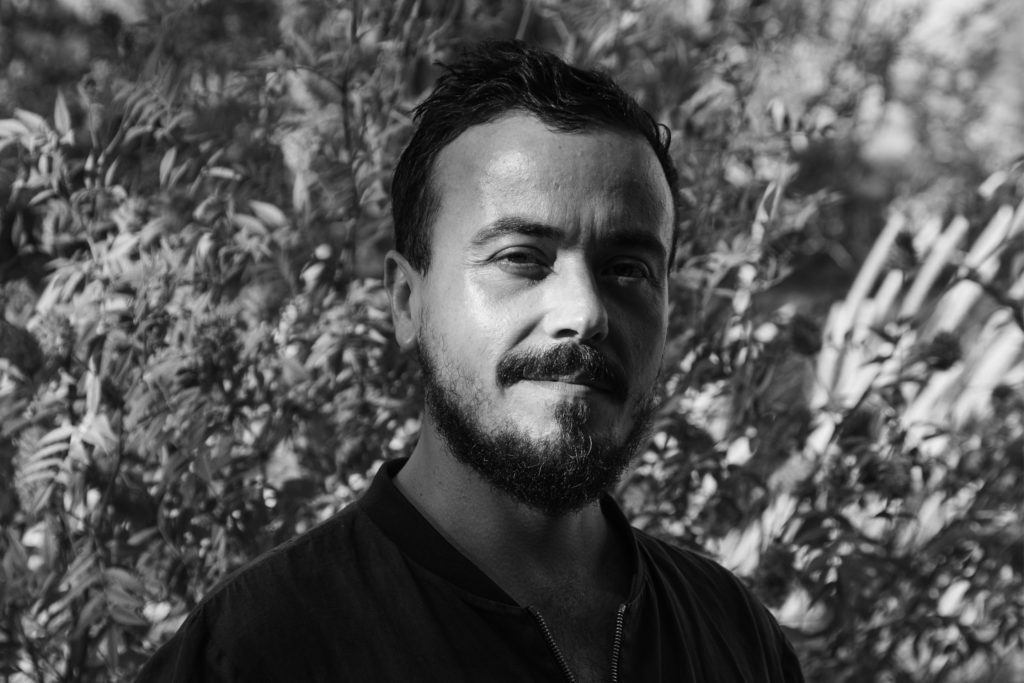 EDOARDO ARUTA
Edoardo Aruta was born in Rome in 1981. He studied at the Accademia di Belle Arti in his native city and at the IUAV University in Venice. During his studies, he also worked as scenographer and stagehand for theatre and cinema productions. Since 2003, Aruta’s work has been displayed in exhibitions in Italy and abroad. In 2013, he founded the artist collective Gli Impresari in Venice, with Marco Di Giuseppe and Rosario Sorbello. Aruta’s artistic practice is based on the examination of the phenomena underlying the experience of daily life, from the interaction with places and the relationship between people and ‘objects’ to the possibilities of exploring the real and fictitious meanings that surround them.

//LA FURIA DEL DIRE
La Furia del Dire was inspired by the expressive register of a social and musical dimension, the posse. Posses came into being to better the existential condition of an entire generation and contributed to defining the role of communities in the city limits and cultivate a cultural revival, street creativity and a horizontal social model. The project aims to highlight a way of protesting, giving rise to social innovation and music, and relating them to what has happened in Italy over the last 40 years. Edoardo Aruta has brought a SoundSystem into Manifattura Tabacchi’s spaces, setting up a series of DJ jam sessions for which he has provided a collection of 12-inch vinyl records, upon which he has recorded samples of radio messages, interviews and television announcements of events that have marked recent political and cultural history. Starting from an archive that is both intimate and universal, the work expands by involving a multitude of sound performances that will in turn be recorded on vinyl, creating a stratified historical documentation of contemporary culture that belongs to all participants and viewers. 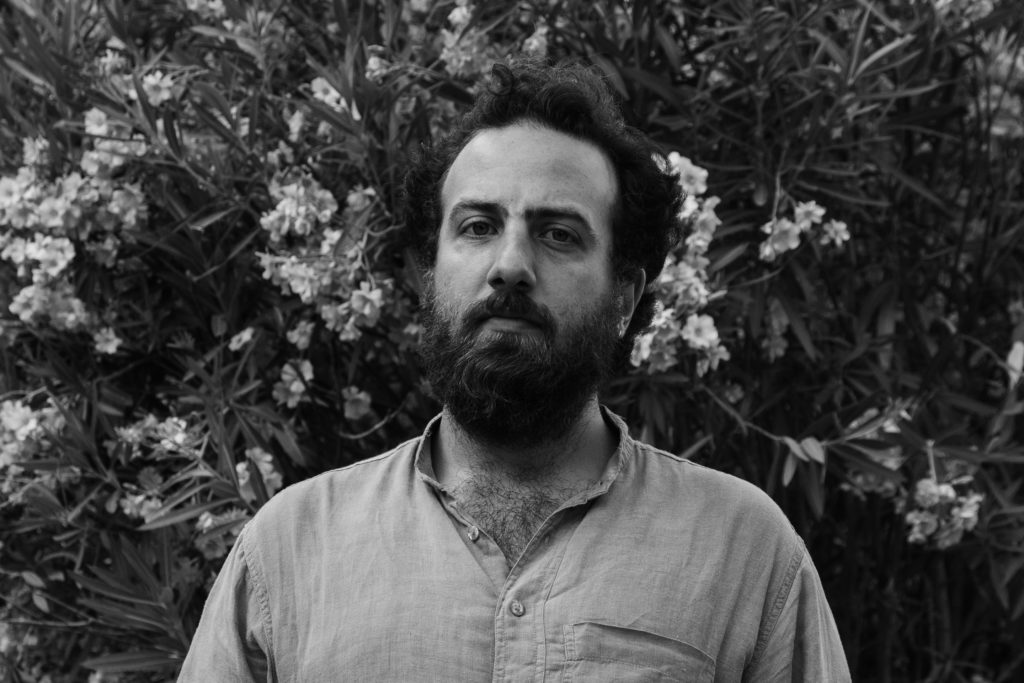 ANTONIO BERMÚDEZ OBREGON
Antonio Bermúdez Obregon was born in Bogotá, Colombia in 1991, where he continues to live and work. His work has been displayed in exhibitions at the notable Espacio El Dorado and the SGR Galería (Bogotá). Obregon’s work has been exhibited internationally at the Humboldt Forum (Berlin) and the Jan Van Eyck Academie (Maastricht). Obregon is a visual researcher and architect, and his dual practice intertwines territory and its different meanings working within the intersection of culture and land. His work deals with topics such as orientation, geopolitics, toponymy, colonialism, exoticism and the imaginary of nations.

//NATURE IS NOT GREEN
In Two Landscapes the visitor finds himself immersed in what seems to be a coherent environment but which, over time, unveils its discordant elements. The installation remotely reunites two environments found at opposite ends of the planet, recorded in real time during the longest day of the year: the Amazon forest in Brazil, paradigm of untouched, violently wild nature, and one of the many cultivated forests in Holland, a prototype of man-made nature, built as an arcadic ideal which anesthetises natures true essence by dressing it in an aura of calm and safety. Tree recycling, extraction and political and economic strategies of the capitalist system ironically have bound these two landscapes in a common destiny. Two Landscapes is a critical reflection of how this relic of colonialism finds its contemporary counterpart in the representation of economic profits. If biopower and dominion over nature pass through the control of its image, the work stages the dichotomy between phenomenon and thing, image and origin, investigating the inhabitable possibilities of the limit that separates them. 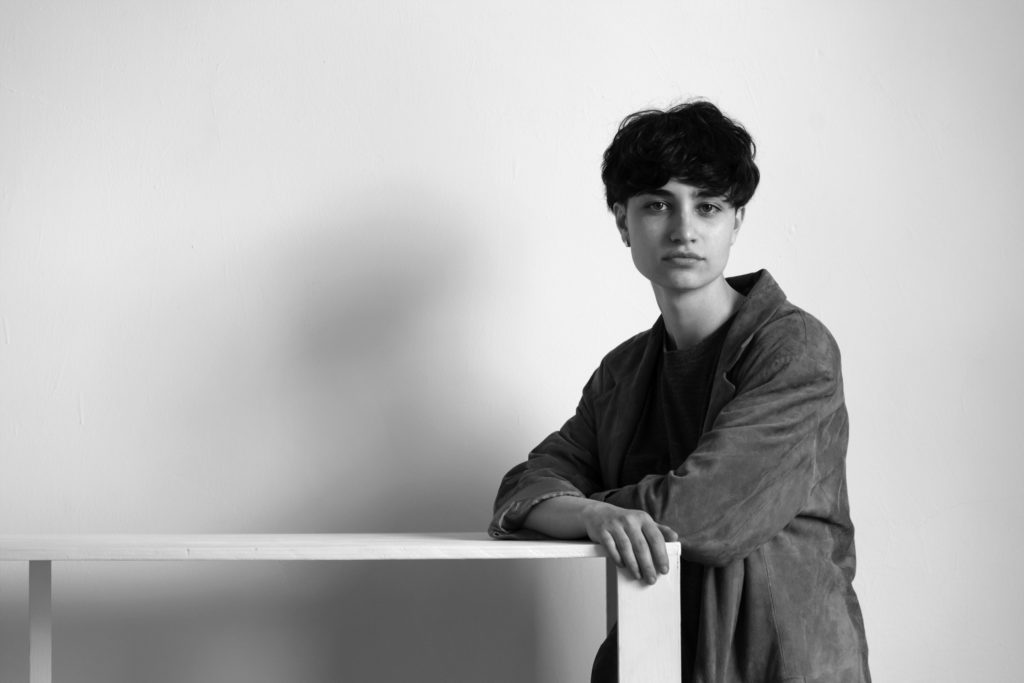 FEDERICA DI PIETRANTONIO
Federica Di Pietrantonio was born in Rome in 1996, where she currently lives and works. She studied painting at the Rome University of Fine Arts. Di Pietrantonio graduated in 2019, and based her research on the thesis spending free time at KASK (Ghent), where she developed the project ‘Vacation Spot’. In 2017, Di Pietrantonio was selected for Mediterranea 18 Young Artists Biennale and the following year she started working at Spazio In Situ as artist and web designer. Her work has been exhibited internationally in Las Palmas (Lisbon), Gouvernement (Ghent), and the Una Vetrina gallery and The Gallery Apart in Rome. Her work centres on the relationships and processes which arise from simulations, virtual reality, and social media platforms.

//not so far away
Using research on the virtual environments of video games as a starting point, not so far away aims to establish a method for defining a new state of nature, mediated by the daily experience of devices and the entertainment industry. Federica di Pietrantonio approaches the environment with a scientific method, examining various video games with differing goals, peculiarities and aesthetics for a new study of contemporary wilderness. Her installation superimposes two machinima videos, recorded during collective playdate sessions, which explore urban spaces, natural landscapes, post-apocalyptic environments and the animal and vegetable species they contain. The area of intersection between the two projections reveals an entirely unique topos, the result of an experiment whose investigative capacities necessarily remain open to interpretation. not so far away invites the user to continue to explore real and virtual spaces, extending this field of research through commonly used tools such as Google Lens. We find ourselves in a space with discordant sounds, moving intermittently between reality and virtual reality, between an experienced dimension and one that is merely evoked.

OLIVIERO FIORENZI
Oliviero was born in Osimo in 1992. For the past ten years, he has lived and worked in Milano. With one foot in his hometown and the other in the vibrant urban hub, Fiorenzi has developed a unique sensibility for the theme of natural landscapes. His personal life experience has inspired him to build complex figurative sign apparati, thanks to which he enters into a relationship with the context in which he works, producing pictorial and sculptural installations. Fiorenzi’s work has been displayed in many galleries, foundations, and museums, including The Address (Brescia), Sonnenstube (Lugano), Fondazione Feltrinelli and La Triennale (Milano), Ex-Dogana (Roma) and La Mole (Ancona).

//4-20 AIRMARKS
An exploration of the relationship between a subject and the environment, 4-20 Airmarks is a kinetic sculpture driven by the force of the wind and capable of interacting with atmospheric elements. The pictorial installation involves the entire structure and guides the gaze towards the wind turbine, which contains a series of figurative and graphic elements that are part of Fiorenzi’s symbolic alphabet. The images, once defined and clearly perceptible, fade into abstract colour when the aermotor is activated, producing a visual effect that is unique and different from the initial drawing. The painted message is therefore only visible in certain atmospheric conditions, and is only in dialogue with its context in certain specific, unpredictable circumstances. 4-20 Airmarks is constantly renewed, thus rejecting the idea of the work of art as an object and as an endpoint, emphasising instead the lived experience, the purposeful construction of ephemeral situations and actions. 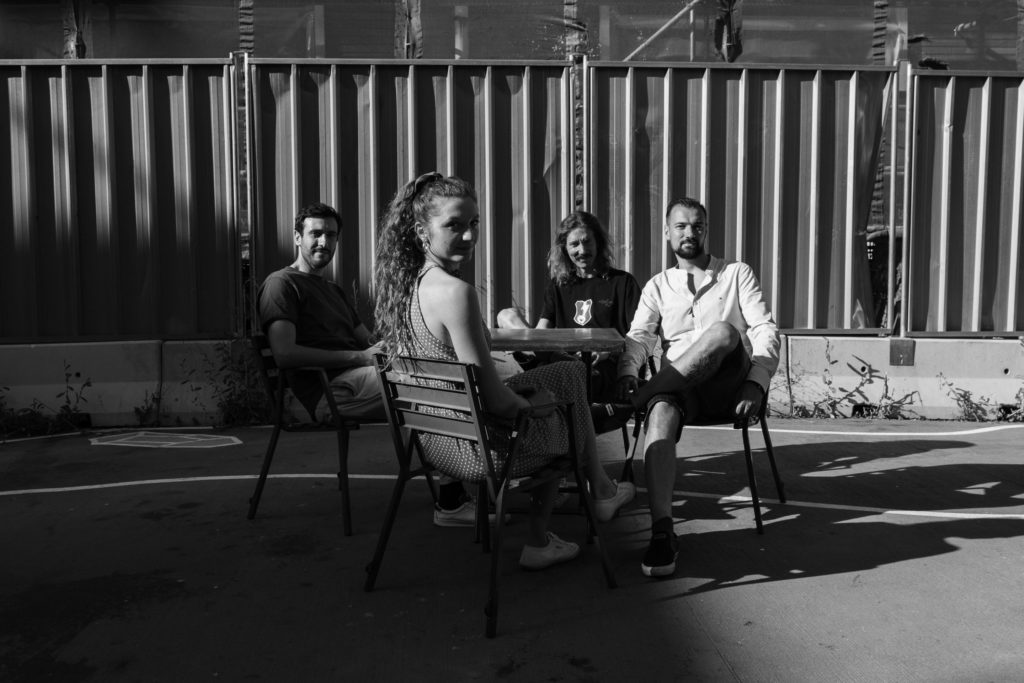 IPER-collettivo
IPER-collettivo (Giulia Landini, Prato, 1992; Lorenzo Romaniello, Pistoia, 1988; Lorenzo Vacirca, Prato, 1988; Marco Conti, Prato, 1988) is a multidisciplinary artist collective formed by four young professionals with different backgrounds. Iper-Collettivo is united by an interest for experimentation, sustainability, and interactive forms of expression. The group shares a vision for art, architecture and ecology and explores the relationship between the territory and its communities through the realisation of socially inclusive projects that invite community participation.

//MICROMEGÀSUONI
How can we re-establish a connection, an experiential bridge between urban and natural environments? Micromegàsuoni is part of an empirical investigation that the IPER-collettivo artist collective has pursued in two different types of landscapes: the city, represented by Manifattura Tabacchi, and a series of nature reserves and forests in Tuscany and Umbria. In the anthropised space, one observes a wooden artefact, whose shape invites one to listen. A totemic element that can be physically entered, the work reproduces and amplifies mysterious sounds that originate from the forest in which the urban artifact’s unseen twin dwells. The pair of wooden soundboxes are united to each other as the sound of one reaches the other: the urban box provides a refuge, a shelter for those who live in the city, but it is also a stimulus to travel along the sound in the opposite direction, from the city towards the outside, in an attempt to reintegrate two spheres that modernity has separated. 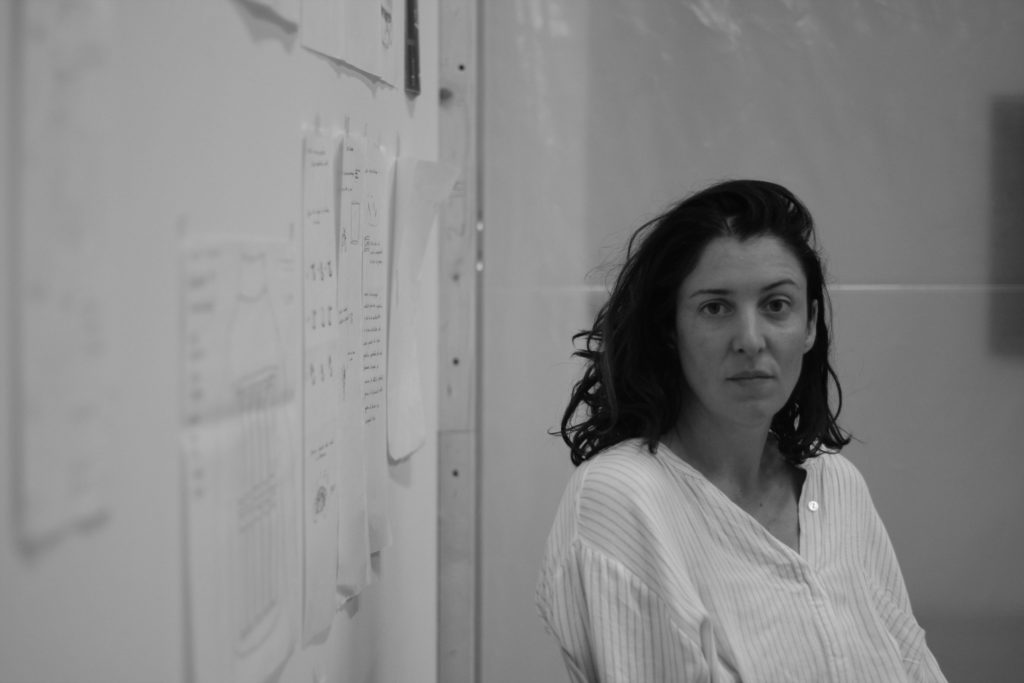 VIOLETTE MAILLARD
Violette was born in Bourg la Reine in 1984. She is a French-Italian artist who works in the field of contemporary art. She has exhibited internationally in several experimental and institutional spaces such as the National Art Museum of China (Beijing), the ex-showroom Gavina and the Museum of Modern Art in Bologna, the Italian Cultural Institute of New York, the Museum fur Moderne Kunst (Frankfurt am Main), Palazzina dei Bagni Misteriosi and Fondazione Feltrinelli (Milan). Among other prizes she was awarded in 2016, Maillard won the XIII edition of the New York Prize and has been artist-in-residence at ISCP, International Studio and Curatorial Program, New York. In 2019 she won the first edition of the Italy-China Prize and has been artist-in-residence at the National Art Museum of China, Beijing.

//BARGARUDA I
Bargaruda I is an experimental project which consists in the creation of a sculpture and designing the journey it entails. The work falls into the liminal space between art, science and industry, transcending the boundaries of art and the artistic space through art itself. The result is a sculpture which looks like a sidecar and is also a functioning vehicle thanks to its modular, thin-film solar panels and the conversion of a Gilera 150 Sport motorbike into an electric motor. The prototype, made at Manifattura Tabacchi with the help of experts from the Department of Industrial Engineering of the Università di Firenze, aims to explore the paradoxes involved in the transition from hydrocarbons to electric energy and to expand the notion of what constitutes a means of transportation. The artistic act thus creates an apparition, the sculpture, and determines its disappearance, setting it on its way.

The investigations that take shape in the artists’ installations find a space for dialogue and analysis at the 4th edition of God Is Green coming up from 15 to 21 sept at Manifattura Tabacchi.