On the occasion of Tomás Saraceno. Aria exhibition promoted and organised by Fondazione Palazzo Strozzi (22 February 2020 – 1 November 2020), Manifattura Tabacchi contributes to the project by reserving spaces for research initiatives on the Aerocene philosophy.

Manifattura Tabacchi represents a new centre for contemporary experimentation in Florence, most notably in its commitment to promoting contemporary artistic projects throughout the area. The international and multidisciplinary nature of these projects has seen them take on different forms, such as artist residencies, independent spaces, workshops and exhibitions, all of which characterises Manifattura Tabacchi as a place that attracts and produces artistic activities that animate the wider community.

The collaboration with Fondazione Palazzo Strozzi fits perfectly into this context, and marks the occasion of Tomas Saraceno. Aria.

“Spider webs as works of art, the cosmos as geometry, vibrations and sounds”

It is how Palazzo Strozzi depicts the works of Aria, the exhibition from Tomás Saraceno, curated by Arturo Galasino.

The exhibition is the largest project that the Argentinian artist has produced in Italy. The continuous exaltation of the context will come to life in a dialogue between the Renaissance and the contemporary, passing from anthropocentrism to a vision of humanity as part of the universe.

The title of the exhibition ‘Aria’ refers to the themes and characteristic elements of the artist’s works, acting as a warning over respect for the planet and a prefiguration for the coming of a new geological era: the Aerocene.

THE COLLABORATION WITH PALAZZO STROZZI

Palazzo Strozzi has become a reference point in the world of contemporary art thanks to its prestigious programme of exhibitions and its production of cultural activities involving the extended community. Manifattura Tabacchi supports the activities of the Foundation and offers itself as a complementary space for research initiatives, welcoming the meeting of these two architectural masterpieces, one of rationalism, and the other of the renaissance.

The choice of an exhibition dedicated to Tomás Saraceno to inaugurate this collaboration is not merely coincidental: the themes that the artist-architect touches upon are issues which Manifattura Tabacchi itself recognises, sensitive to questions of sustainability, the relationship between humanity and nature, and the construction of communities and alternative forms of housing and interaction. As a new place of experimentation, dedicated to contemporary art, Manifattura Tabacchi intends to develop into a creative medium for rethinking questions of society, politics and ecology, offering innovative and experimental ways not only in the production of art, but also in what we get out of it. For this reason, the ties to the work of Tomás Saraceno are not only seen in thematic terms, but also in the sharing of the process, overcoming barriers, the physical and conceptual involvement of the public, and the integration of different disciplines from both inside and outside the world of art.

The collaboration between Manifattura Tabacchi and Palazzo Strozzi is one that builds a bridge between the historic centre and the suburbs, the renaissance and the contemporary, setting up an exchange between the two institutions which represents the first steps along a path of establishing valued connections between the different actors in the Florentine artistic scene. As such, Manifattura Tabacchi is building a multidimensional relationship with Palazzo Strozzi, which will take on the form of hosting and co-creating exciting and pivotal projects in the exhibition programme.

Intended as a context for human development, Aerocene represents ever growing research, and an experimental, open-source and collaborative practice, formed by a global community of dedicated and diverse people who collaborate to promote environmental awareness and the collection of data on the atmosphere. Its activities become manifest in the testing and launching of aerosolar sculptures that hover in the air thanks to the heat of the Sun and infrared radiation from the surface of the Earth.

It is into this context that the Aerocene Flights programme takes place, an integral part of events at Palazzo Strozzi, with Manifattura Tabacchi as its sole partner. Aerocene Sculptures are flying sculptures that represent new ways of thinking about our energy resources: air, heat, and cooperation between people are the elements that are necessary to make these grand sculptures float. Nothing combustible, no solar panels, no motors or batteries: only the force of the planet.

Starting on 21 February and for the entire duration of Tomás Saraceno’s exhibition, Manifattura Tabacchi will host Aria, a space dedicated to the in-depth study on the themes of Aerocene, through the projection of videos, materials and publications, and the exhibition of the Aerocene Explorer Backpack, a flight starter kit. Practice follows study and contemplation in the form of events for the Aerocene Flights (to be announced).

The whole community will be invited to make the Aerocene Sculptures fly at the ex-industrial spaces of Manifattura Tabacchi, following the collaborative spirit promoted by both Aerocene and Manifattura Tabacchi itself. The flight starter kit, which contains an aerosolar sculpture, will hang in the air without the use of combustible fossil fuels, helium, hydrogen, solar panels, batteries or burners. The experience is open to all and does not require booking.

The inauguration of Tomás Saraceno. Aria also sees the beginning of Sistemi complessi, a project dedicated to the students of the artistic academies in Florence, and which aims at using the exhibition as an environment for research on themes of interdependence within the scientific field. Manifattura Tabacchi is supporting the initiative and making its own spaces available for the development of the research project, offering an opportunity for young artists to work on the different aspects involved in the production, organisation and promotion of an artistic project in its entirety. 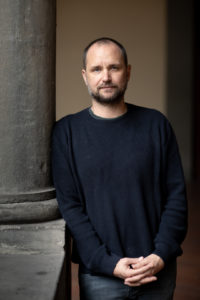 A dynamic cultural centre of international importance offering a high quality exhibition and public programme within a masterpiece of Renaissance architecture, Palazzo Strozzi is a focal point of Italy’s cultural scene. Built around the original Renaissance courtyard, a public square that plays host to concerts, performances, installations and interventions and sees more than two million people pass through it every year, Palazzo Strozzi’s is a key cultural hub in the city and an important link between Florence and world.

The first example of an independent public-private cultural foundation in Italy, the Fondazione Palazzo Strozzi has been responsible for the Palazzo’s programme since its inception in 2006, organising more than 50 exhibitions and attracting in excess of three million visitors to date. Creating a lively dialogue between the old and the new, Palazzo Strozzi’s exhibitions range from critically acclaimed historical surveys of old masters such as Pontormo & Rosso Fiorentino or Verrocchio, master of Leonardo, to exhibitions with leading contemporary artists including Ai Weiwei, Carsten Höller and Marina Abramović.