Plant life is one of the key themes of the second edition of God is Green, the Manifattura Tabacchi festival dedicated to sustainability and the future. This talk looked into the relationship between humanity and the planet and its botanical side, trying to picture the real role of the human species within the earth’s ecosystem.

Could plants, with their long and peaceful existence, be an example and a resource for the future of Homo sapiens? Simple questions like this, which Tommaso Perrone, director of LifeGate, posed to the speakers, opened up discussions around endless possible applications and alternative solutions for continuing the existence of the human race.

Plant organisms represent 85% of all life on earth, whereas animals only account for 0.3%, on an evolutionary level this means that plants are decidedly more adapted to life on Earth. Stefano Mancuso, plant neurobiologist, director of LINV and co-founder of Pnat, explained that evolution doesn’t have any other objectives outside the propagation of the species, there are no aims in terms of intelligence, as we understand it, or of beauty, only of survival. One can say that the existence of a species is a mere accident, one case that by chance has been successful over others: but this success is limited and fragile for human beings. In fact, we are one of the rare organisms that destroys the environment in which it lives, only a few primitive viruses do the same to their hosts.

“It’s not the world that is in danger, it’s the existence of humanity; the planet and nature would happily survive us and, given our fleeting presence on the earth, little would remain of everything we’ve ever created.”

Survival is not a given fact, it’s an objective that we have to achieve, and in order to do this we have to study the ecosystem in which we live, but above all we have to understand more about the species that have had the greatest success at surviving, such as plants.

Mancuso relates the current historical period to the ending of a war in which the country has been destroyed, in order to go ahead everything needs to be reconstructed in a way that is sustainable, does not create pollution and does not over-consume resources. And for this proposal plants provide an enormous wealth of possibilities: by simply studying them and imitating them we can find solutions to most of our problems.

“The question of the environment is a social question and absolutely the most important question that has faced humanity in its history. We are facing an historic challenge and these challenges also provide great economic opportunities”

The work of Valentina Porceddu is based on this concept. She is an architect at studio Mario Cucinella and teacher at the School of Sustainability, who uses her studio and the imitation of plant species to re-conceptualise architectural projects around the idea of improving liveability in the city.

Valentina Porceddu also spoke about the energy locked inside structures, meaning the energy that is contained in the materials of a building which could be exploited to assist the running of that same building. Just as in the metabolism of a plant organism, we can study the flows that the ‘life’ of the building produces and try to channel them into a type of circular economy, creating a sort of ‘metabolism’ for the building, autonomous and efficient, which reuses waste instead of only producing it.

“On one hand it’s necessary to integrate plants into architecture, to understand the benefits and measure them, on the other we can also draw inspiration from the strategies they use in order to innovate new methods in planning and construction. This is the co-working we need!” 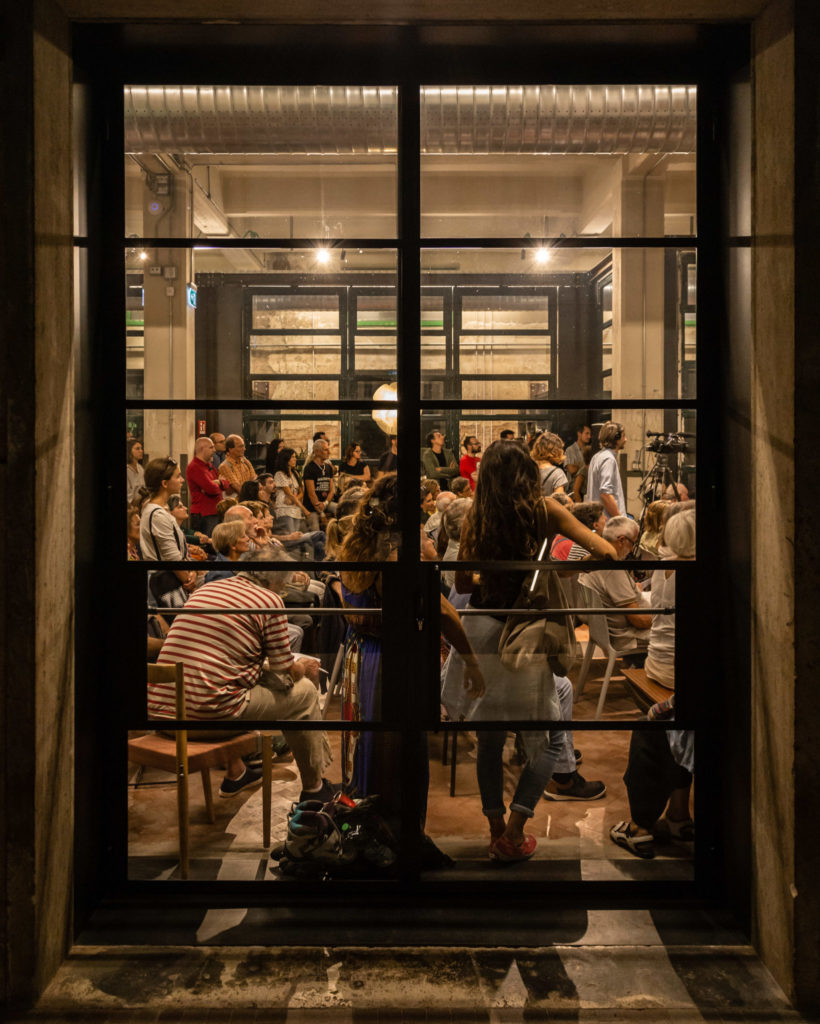 These same premises gave rise to Pnat, which aims to study plants and use them to create innovative new devices, aiming to promote a more equitable coexistence between mankind and nature and improve the liveability of the planet. Pnat is a multidisciplinary design team which is coordinated by Stefano Mancuso and made up of architects and plant science experts.

Unfortunately, long-standing cultural barriers still obstruct this peaceful coexistence, the very origin of the terms that refer to the city derive from urbs, which comes from the verb ‘urvare ‘, which means ‘to make a furrow with a plough’. This tells us that a fundamental act of creating a city is creating a border that separates the city from nature. On one side we have history, humanity and order, on the other we have complexity, nature and chaos. Pnat wants to cross this ‘furrow’ and bring plants into human spaces, and to do this we need to better understand how to coexist with plants.

“Pnat is like a jazz band, it works in a horizontal way: it’s not about the bravura of the soloist, it’s about inserting that solo into the rhythm of the group. This is also the substantial difference between the structures of animal organisms, which are governed by a brain that commands them, and plants which work in a horizontal rather than vertical way. For us this is a real way of innovating.” 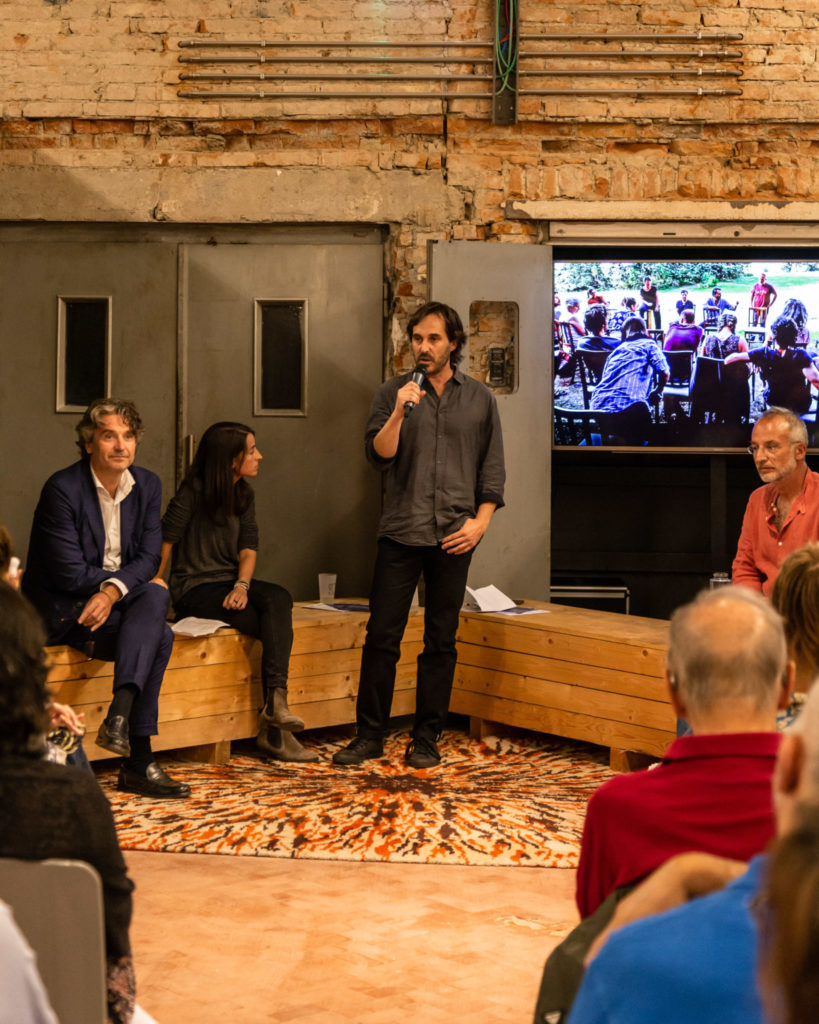 All voluntary coexistences are fed by reciprocal advantages, as an example, the Fabbrica dell’Aria (Air Factory) is a device that purifies the air in the indoor environment using and improving on a capacity that is intrinsic to plants. Plants are able to metabolise pollutants, which then enter their life cycle, giving us clean air in return.

“Sustaining the community that sustains us is the focus of coexistence and also one of the ethical principles of sustainability.”

“Mankind is an exquisitely cultural subject, which acts and in acting cultures the world, transforming the act into power, thus making the difference, the gap, between reality and possibility.”

Walter Mariotti, editorial director of Domus, returned to the theme of the separation of humanity and nature, which mankind has created through constructing furrows and borders.

Mariotti cited the words of Theodor Wiesengrund Adorno, who made the distinction between first nature, the forest and the chaos outside the confines of the city, and second nature, that which is current and has been created by the presence of humans and human culture. Adorno is not moved by nostalgia for the forest, because according to him there is no need to return to that pastoral and bucolic life, which he sees as an unreal and illusory myth, and so also extremely dangerous.

Nature is in flux: it is no longer nature with a capital N, no longer a goddess, but a product modified by humanity. For Walter Mariotti, we must admit and understand the historical being as a natural being, we must not idealise something that no longer exists, a pure being that is above, or below, the human being.

There are many difficulties in orientating the debate between these questions and this betrays many fragilities, especially within western elites. The elites seem less and less prepared on a theoretical level and are therefore more exposed to gut reactions, which responding to emotional and media impulses transform every question into propaganda.

Murray Bookchin (The Ecology of freedom)

On a physiological level, our perceptive apparatuses have evolved to give more relevance to what could be a threat to the safety of the species, so this certainly doesn’t include plants as they don’t generally constitute a danger to humans. Because of the large amount of plant species normally found in nature, human beings often consider them more as a background, a contour rather than a subject; if you show someone a photo of a large forest and a small animal they will generally take note of the animal rather than the immense amount of plants in the background, this phenomenon is called plant blindness.

For Leonardo Chiesi, sociologist and university professor at Florence University, this attitude of the upper echelons of contemporary society is nothing but the symptom of other widespread attitudes. 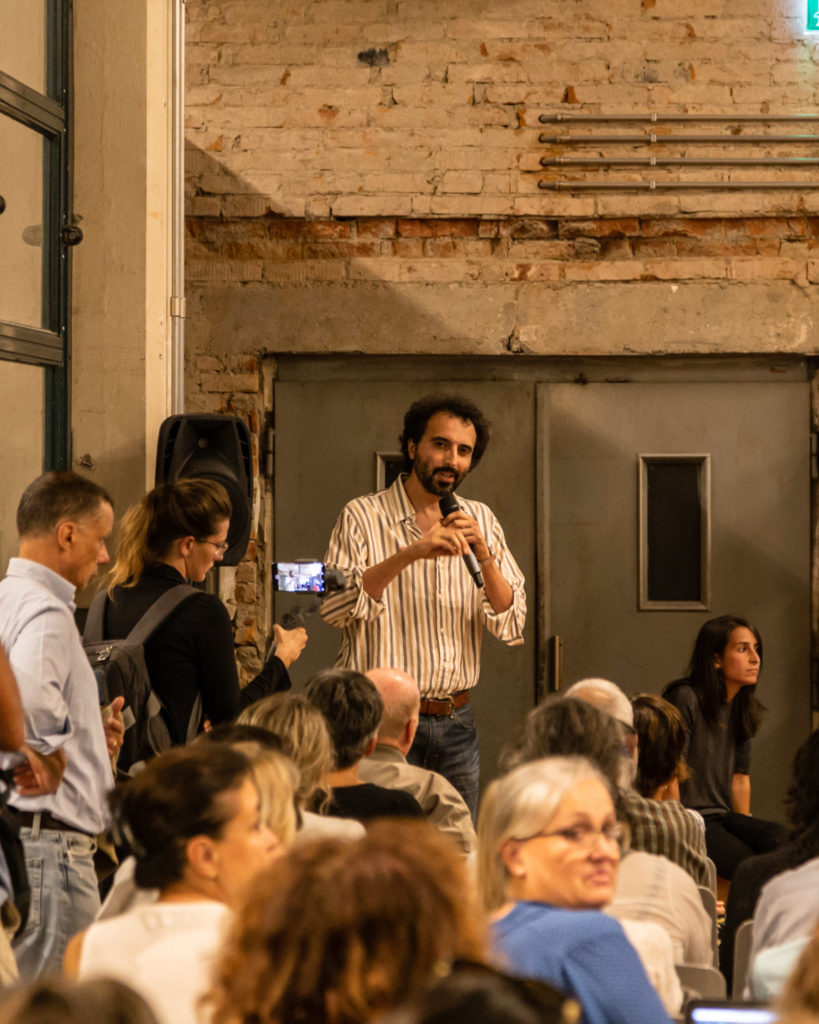 More than half chose subjects that are closely tied to humanity and its needs. There were only 37,000 graduates in natural and agricultural sciences and only a small amount of these studied subjects related to botany, which clearly tells us there is not a great amount of attention at a social level.

The rate of innovation in a specific scientific field depends on how many people are active in that field. The lack of funding depends on the lack of requests in a given field of research and not vice versa as is often believed. At present it is clear that given the low collective interest in plants, most of the funds will go to other areas of research.

“Change must take place where it can impact on the future, that is, in schools, in the hope of introducing processes that over time can bring about a rearrangement of this social blindness towards plants.”

B9, the prototype for the Manifattura of tomorrow

Food and art: the B9 makers