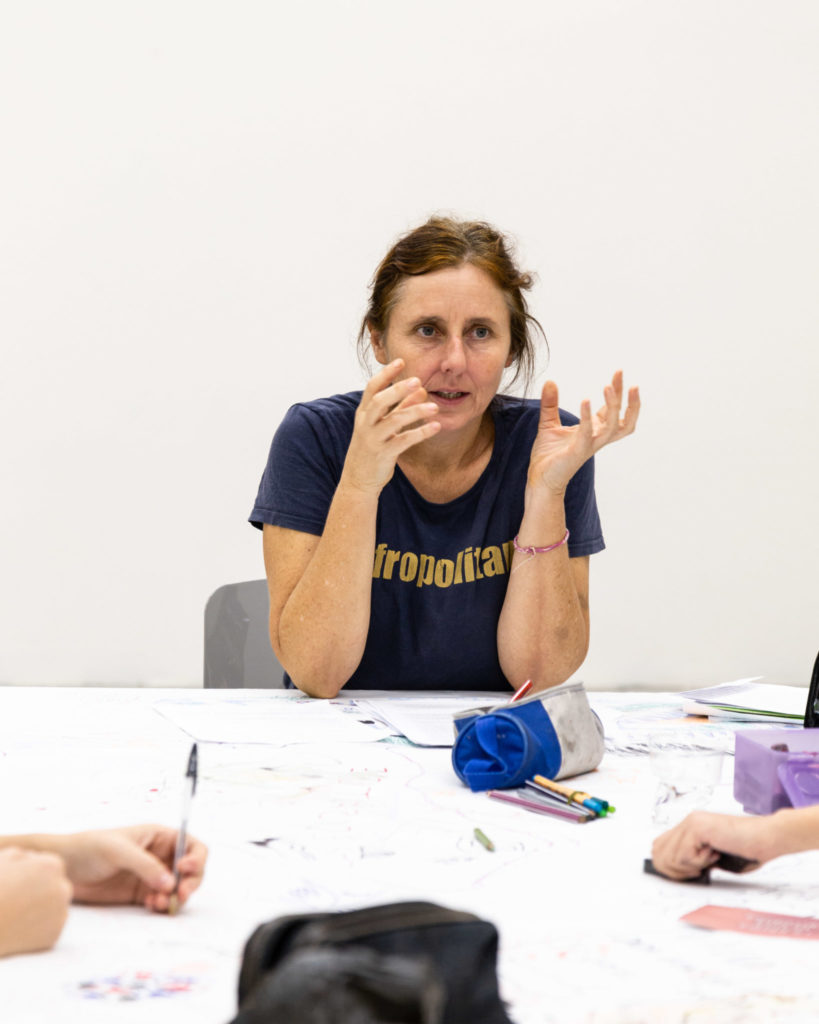 From 25-27 September, the artists in residence began the first workshop of La meraviglia edition of the residencies with Stefania Galegati, visual artist and teacher at the Academy of Fine Arts in Palermo.

Developing naturally and spontaneously, the course took on a dialectic structure, allowing the participants to experience it in three different phases: losing old habits, sharing, creation. 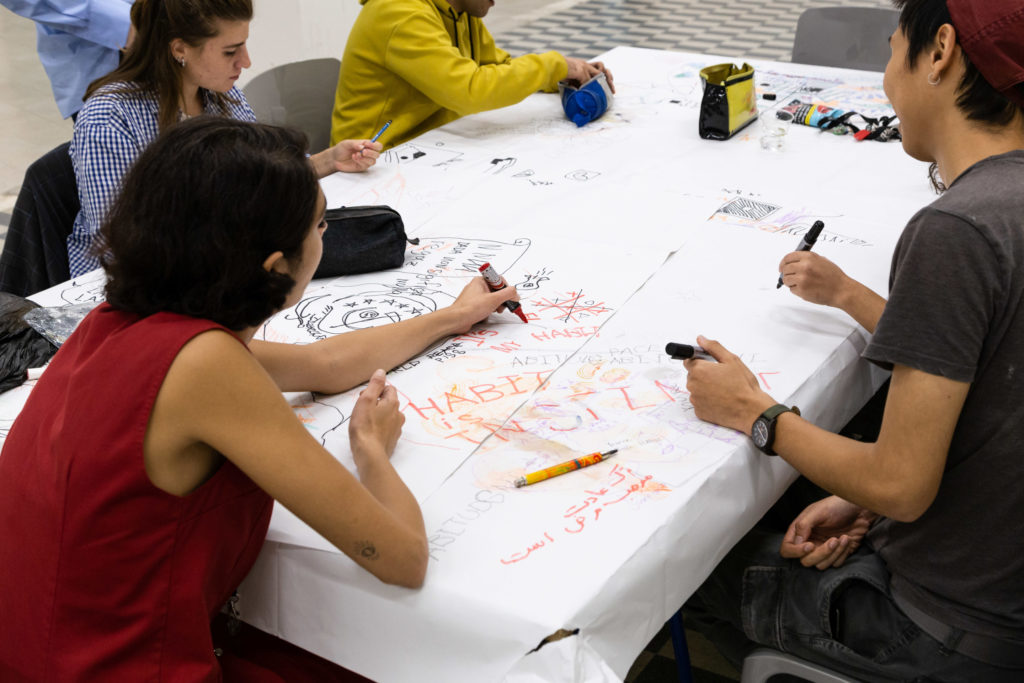 A large sheet of blank paper on a table and coloured markers. These are the ingredients for the first day of work, during which Stefania Galegati wanted to begin with the losing of old habits, meaning the removal of all norms, all that is ‘usual’. With this in mind, that artists were asked to draw with their non-dominant hand whilst listening to the words of their workshop tutor.

Every now and then, the tutor would ask them to change their positions, to take them further out of their comfort zone and get the brain to react to new conditions. In this sense, the first step of the meeting was to prepare the ground for the following phase by clearing away the weeds of preconceptions and fixed ideas. 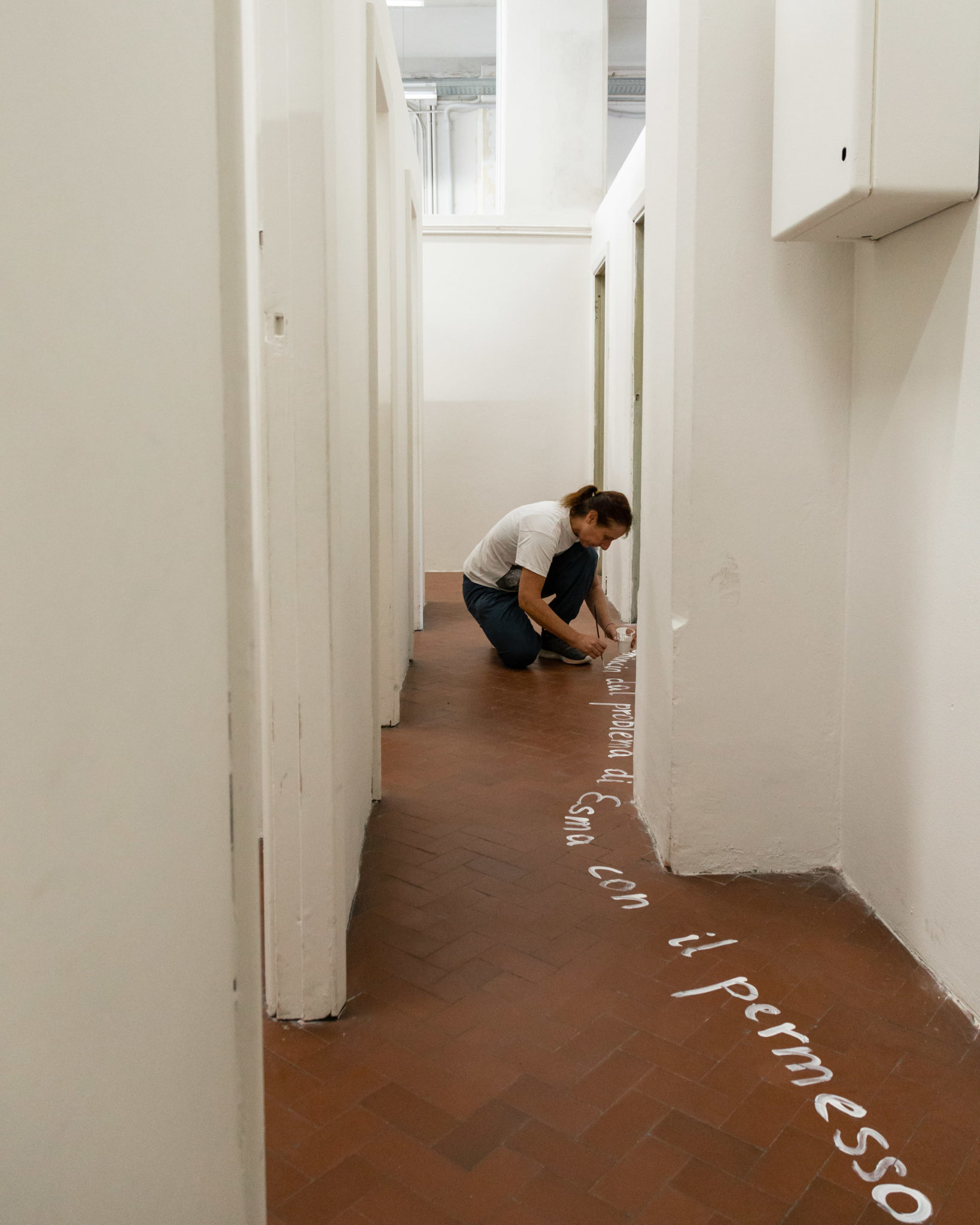 This set up a dialectic process, both in terms of linguistics and materials, in which they stripped away the personality and existence of each object they had brought, allowing a network of similarities to emerge between the problems, the images and the themes.

Mythology, literature, nomads, family, politics, philosophy, religion, cultural misunderstandings. Recurrent subjects for each of them, as well as the objects, such as the sheets of paper that Anna had collected from the street and brought to the table. All the problems converged on a singularity that from a practical point of view contained all of them, which concerned Esma and the bureaucracy of obtaining the right to remain in the country. It was decided that solving this grotesquely unsolvable issue would lead to the solution of all the other problems.

All part of the problem of Esma’s right to remain and the willingness to resolve this together.

The third day was the moment for elaboration, for which Stefania Galegati had chosen a particular place in B8: ‘the impartial’. Everything they did within ‘the impartial’ would catalyse their previous discussions as well as the sharing phase.

Stefania began this ‘programmatic’ pathway by writing in white on the floor, all the others would then elaborate on it in their own way, practically individual and conceptually unanimous.

Influenced by the chance meeting with some ex-Manifattura Tabacchi employees and the stories they told, the artists decided to interview all of the current employees, in a way that represented all the different social structures that can be found within the place.

“What are your ideas for a different global social and political structure?”

The question, which has obvious utopian nuances, was meant to unsettle people and make them reflect and question their desires and wishes for a world in which things are different. It is open to fantastic possibilities, but with an eye on what’s actually possible. Inside the ‘impartial’, a video played a loop of more than a hundred responses to this question, together with contributions from each of the artists.